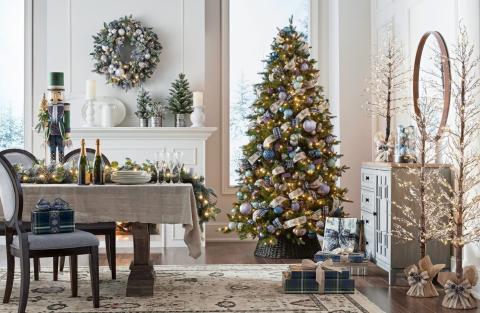 Sam’s Club is going all out this holiday season, offering twice the number of savings events compared to last year; a new direct-to-home wine program; and higher quality food and décor.

A broad range of food items and wine delivery in select states are key elements of Sam’s Club’s early and aggressive start to the holiday season.

Sam’s Club said it plans to make it easy for members to entertain this holiday season with an impressive lineup of holiday décor and delicious food, ranging from premium side dishes and appetizers to bakeries offering decadent desserts. The $63.9 billion Walmart division is also testing direct-to-home wine delivery in 16 states with wine delivery platform Drinks. Initially, Sam’s Club members will be able to order private brand Member’s Mark wines, with plans calling for expansion to more states and additional wines next year.

Holiday entertaining food initiatives have long been a key component of Sam’s Club’s merchandising strategy, but this year it is riding the momentum of record membership levels driven by the pandemic. With more members shopping its 599 U.S. locations, Sam’s Club's plans also call for double the number of shopping events across five weekends in October, November and December. It also recently launched its first-ever 35-page holiday preview catalog.

The early and increased promotional efforts to an enlarged member base promise to expose larger number of shoppers to key food and consumables categories that were already a destination for many Sam’s Club members.

“Our members pay to shop with us, and they deserve a special experience,” said Megan Crozier, chief merchant, Sam’s Club. “Sam’s Club will ‘Bring the Merry’ with more this holiday season – more quality items in the club and online, more value, more ways to shop and more special experiences to delight our members all season long.”

Among the ways Sam’s Club plans to “Bring the Merry” are unexpected moments featuring celebrities, demos every week, and new, festive holiday signage and décor on both the exterior and interior of every club. Five Sam’s Club locations will also host what it is calling a “Merry-ville” in parking lots, where it says, “members can enjoy an over-the-top holiday experience including an ice-skating rink with special performances, and much more.”

“Our membership has reached record levels, and our members are telling us it’s ‘game on’ this Christmas, maybe like never before,” Sam’s Club Chief Member Officer Tony Roger said, alluding to the potential for record sales. “Around here we say our members ‘expect something special,’ from us, and we will deliver with more events, an earlier start, more marketing support than ever, incredible items, and technology like Scan & Go that lets you skip the line and beat the crowds.”

If Sam’s is to have a record holiday season, it will need to exceed guidance shared in August when second quarter results were reported. Sam's Club's current guidance calls for full year same store sales growth, excluding fuel and tobacco, of 7.5% to 8.5%, versus a 2020 full year comp increase of 11.8%.

“Nineteen years ago, I got the opportunity to become the chief merchant at Sam's, and I can confirm there hasn't been a time in at least 19 years when Sam's has had this much momentum,” Walmart CEO Doug McMillon said in August.

Sam’s Club, a division of Bentonville, Ark.-based Walmart Inc., operates nearly 600 clubs in the United States and Puerto Rico. Walmart operates about 10,500 stores under 48 banners in 24 countries, and e-commerce websites, employing 2.2 million-plus associates worldwide. Walmart U.S. is No. 1 on The PG 100, Progressive Grocer’s 2021 list of the top food and consumables retailers in North America, while Walmart-owned Sam’s Club ranks ninth.