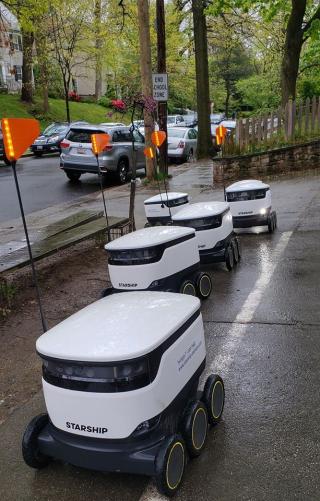 Robots are making grocery deliveries in the Washington, D.C., area

As shoppers stay home and many stores remain closed, robots are starting to take over more sidewalks and other spaces in the interest of food retail.

The slow but increasingly steady rise of robotics in the food industry is not a new story. Even so, the pandemic has raised the profile of food retail robots and their ability to deliver products to consumers and perform other fundamental tasks.

A good recent example comes from Washington, D.C., and the surrounding area, where Broad Branch Market “has brought on 44-pound, six-wheel self-driving robots equipped with sensors and (artificial intelligence) to ferry deliveries to customers in the area,” according to a local news report. “Broad Branch has closed its stores to shoppers and shifted its operations to delivery and pick-up orders only during the crisis.”

Broad Branch shoppers eager to use to service must first download an app from Starship Technologies, a company founded by Skype veterans and which has since worked to expand its robot delivery services to colleges and food retailers. “Using the app you can create an order for either delivery via robot or pick-up from our front stoop,” the food retailer instructs. “Orders for the front porch are more likely to be ready first, if you are in a hurry please choose this option.”

Further details about the service were not immediately available from Broad Branch Market.

Its use of the Starship Technologies robotic delivery service come as that company reportedly is experiencing significant growth and opportunity during the pandemic, including via food retail stores and, before the pandemic, college campuses. Coming off a $40 million funding round in August 2019, the company has recently expanded its offerings to new areas of the country. “Starship added a grocery delivery service in Washington, D.C in late March and expanded to Irvine, Calif.,” TechCrunch reported in April. “It also expanded its service area in Milton Keynes, U.K., where it has been operating since 2018. The company said it plans to add more cities in the coming weeks.”

Broadly speaking, food retail robots have more real and potential skills than just deliveries. Designers and other backers of the technology envision robots that can take inventory, help stock shelves, clean up messes in aisles and work areas and pick and pack orders at fulfillment centers.

But as argued in a column for Progressive Grocer earlier this year – just as signs of the pandemic were becoming clear – even with these new deployments of robot deliveries, the future of grocery robotics faces some serious obstacles. “Beyond the robots recently introduced to stores for taking inventory and cleaning up messes, grocers have started looking to automation to fill online orders and speed up delivery,” wrote Pradeep Elankumaran co-founder and CEO of San Francisco-based Farmstead, a digital grocer. “While this could potentially improve just the pick efficiency, grocers can only really begin to make money on this when they start getting around 4,000 online orders a week connected to the automated location, which could be challenging.”

That said, the area served by Broad Branch Market is relatively dense, educated and affluent, and all of those factors would work in favor of consumer use – and post-pandemic acceptance – of more robot food deliveries.