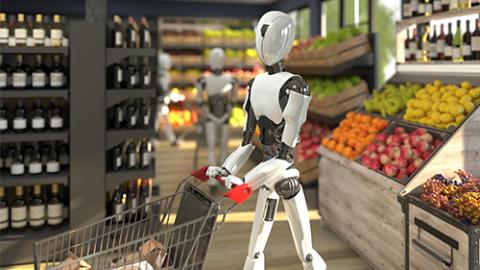 There’s another wave of disruption coming to the world of food and consumables retailing that will fundamentally change many aspects of how an entire industry operates and how consumers interact with retailers.

That’s saying something for an industry that has experienced a tremendous amount of change over the past decade, and then squeezed in another decade’s worth of change during the past seven months. Much of the change that happened during the industry’s first, and still ongoing, wave of change involved the collection and usage of data. This type of change fit neatly under the umbrella of digital transformation. The next wave of transformation that will happen in food retailing won’t be as neat, because it involves the movement of physical goods rather than the manipulation of data with artificial intelligence to unlock new insights or improve decision-making.

There’s a new age of automation looming for food retailers that’s being driven by profound changes in shopper behavior and the increased cost of labor. Just look at what happened from March through August, when it was common to see retailers report triple-digit rates of growth for digitally enabled sales, with stores functioning as fulfillment centers for the picking of orders for either delivery or pickup. Stores were never optimized for this purpose, and so the picking is incredibly inefficient and costly, which is why success for many is defined as slowing the rate of losses rather than improving profits.

The solution is to leverage technology and increase the use of automation for order picking, removing that process from the sales floor so shoppers can shop, and to do so rapidly, thus breaking one of the key tenets of modern food retailing, which is based on the transference of last-mile logistics costs to shoppers, who select their own orders and handle the transport of merchandise. This grand bargain with consumers served the industry well for many decades and was a fundamental aspect of every retailer’s business model, even though there was variation in store sizes, product assortment and presentation, and the level of service provided.

But now, well, everything is different, because in the span of seven months, last-mile logistics costs have shifted back to retailers. That’s why the new battle in retail, and food retailing in particular, will increasingly be fought on automation. It’s impossible to overstate the significance of this shift, because nothing happens in retail if products don’t move from point A to point B.

Even so, we’re probably in the Gartner Hype Cycle period known as the “peak of inflated expectations.” The promise of automation is huge, and there are a lot of experiments out there, or waiting to get off the ground, that will determine the future. They aren’t all going to work, and at some point we’ll enter Gartner’s “trough of disillusionment.” But then we’ll get to the “slope of enlightenment,” where the benefits of automation are more fully understood, embraced and adopted. Lastly, the industry will enter its “plateau of productivity,” with autonomous technologies and robotics widespread and yielding benefits.

This Hype Cycle progression was developed by Gartner in 1995 at the dawn of the digital age, when there was plenty of hype. A year later, Microsoft founder Bill Gates offered his views on hype and where the technology world was headed in his book “The Road Ahead.” In it, there’s an often cited passage about how “we always overestimate the change that will occur in the next two years and underestimate the change that will occur in the next 10. Don’t let yourself be lulled into reaction.”

That’s not what’s happening in the food retailing world. Change as it relates to automation will be profound in the next two years. That’s not an overestimation, precisely because those driving the change haven’t underestimated how different business conditions and retail operations will look a decade from now.