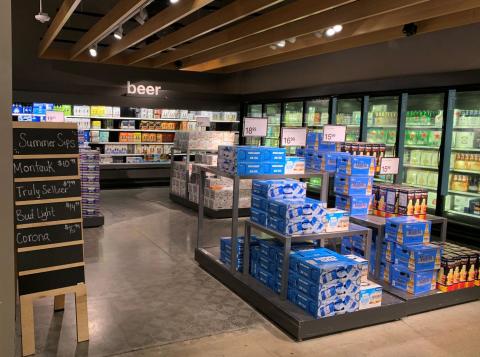 Despite online inroads, beer and wine remain top destination departments in physical stores, resulting in inventive merchandising treatments such as this "beer cave" at a Target store in the Northeast.

The face of the beer business has changed over the past several decades, but the fundamentals of merchandising and promoting the category at retail remain much the same, even though there are new complexities related to juggling the broader range of category segments.

For example, ciders; hard versions of soft drinks, including the explosive hard-seltzer category; canned wine; and canned cocktails all compete with core domestic beer today, even if many of the new beverages emerge from established brewers. Most notably, the hard-seltzer category is conspicuous for its growth at retail within the broad market defined by IRI as “total U.S. multi-outlet,” which consists of grocery, drug, mass market, convenience, military, and select club and dollar retailers.

To get a sense of the growth, IRI in the 2016 calendar year, showed sales in the category defined as “beer seltzer centric” of only $30.5 million in multi-outlet. In the 52 weeks ended this past Aug. 8, however, sales totaled a whopping $4.48 billion. The gain for “beer seltzer centric” has outstripped other segments in the larger beer category, even if growth on a percentage basis has begun to moderate off a larger base of sales. Even so, the “beer seltzer centric” segment was up 44.3% in the 52 weeks ended Aug. 8. As a result, the category has begun to comprise a larger percentage of the larger share of the domestic beer category, and now stands at 10.2%, according to IRI data. 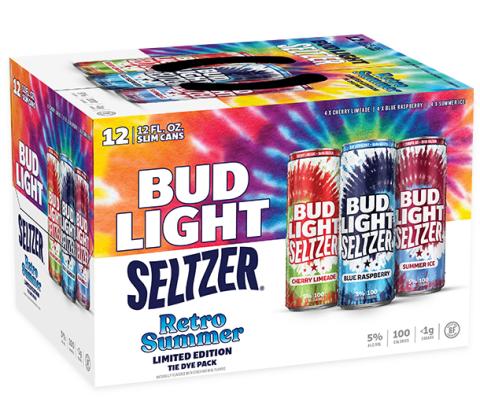 “Our consumers have continued to reach for Bud Light Seltzer because they know we consistently deliver the great taste and fun flavors they’re looking for,” says Andy Goeler, VP of marketing, Bud Light at Anheuser-Busch. “Our ability to remain nimble has allowed us to run the edge of innovation, like we did with the Bud Light Seltzer Retro pack, and its success speaks for itself. We’re thrilled to now be offering Retro’s flavors to fans and new seltzer drinkers alike year-round.”

The Seltzer Retro pack quite literally made a splash over the summer with its distinctive colorful packaging, which made for lively and compelling promotional displays that helped goose sales.

Big brewers and major importers have been retooling to feature alternative beverages under new and established branding. For example, Molson Coors this summer expanded its Vizzy hard-seltzer product line with an all-watermelon variety pack. Common in the segment, fruit flavoring can draw consumers who might not like beer’s more bitter taste profile. Molson Coors draws attention to a health-related element that has been critical in the rise of hard seltzers, which hit the market as lower-calorie alternatives to beer. Vizzy’s new 100-calorie, 12-ounce can launch featured an added focus on its vitamin C content and real watermelon juice formulation.

“After 234 years under the label of a ‘brewing company,’ we redefined ourselves in 2020 as the Molson Coors Beverage Co., ready to commit and expand our offering inside and beyond the beer aisle as a serious player catering to new consumer demands and evolving repertoires,” notes company spokesman Frédéric Bourgeois-LeBlanc. “This was the largest outward marker of our global revitalization plan, which is rooted in our exploration of CBD and cannabis products, nonalcohol beverages, wines or spirits. The Molson Coors Beverage Co. will seek out the significant growth opportunities.”

Molson Coors looks at a wide variety of products under the banner of refreshment beverages that appeal to consumers who are interested in alternatives to traditional drinks, as well as new experiences.

Bourgeois-LeBlanc adds that 48% of North American consumers have been “searching for new beverages other than beer and traditional sodas. With the explosive growth of better-for-you beverages over the last couple of years, nutritional elements are now table stakes for American and Canadian consumers exploring alcoholic beverages.”

Hard seltzers are just one factor in a market that’s evolving in a broader sense. 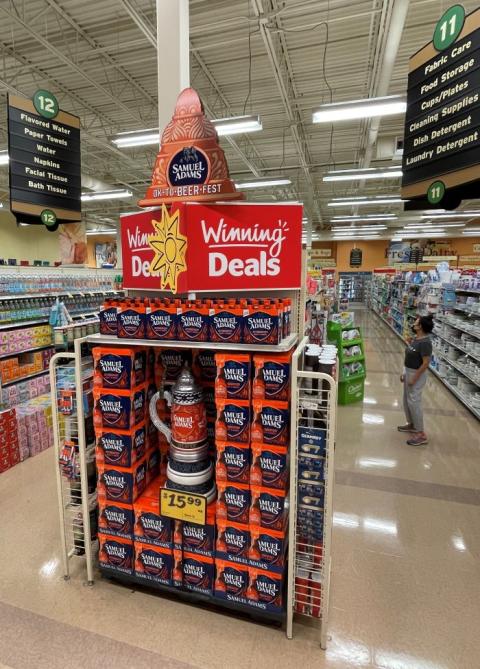 “Hard seltzer has been a strong growth category, and while growth has been decelerating in 2021, there isn’t another part of the beer industry with that kind of potential,” he observes. “Seltzers remain the fastest-growing part of the beer industry anywhere in North America. We believe that we have two clear and differentiated winners with Vizzy and Topo Chico Hard Seltzer on the U.S. market. Also, while it’s very early, we recently launched the spirits-based Proof Point.”

The relative fragmentation of the beer market has prompted producers to rethink their brands and execute accordingly. However, they haven’t broken with successful traditions, such as promotions during holiday occasions. Heineken USA just unveiled its Dos Equis merchandising graphics for Halloween and Dia de los Muertos, after significantly realigning the brand not only to continue appealing to existing customers, but also to generate awareness and trial among additional consumers.

“We continue to leverage strong distributor and retailer partnerships to drive sales and marketing execution, ensuring that our products are available to shoppers where and when they want them,” says Ligia Patrocinio, senior brand director, Dos Equis. “Our consumer-oriented innovation strategy is working and confirms that the brand can stretch into new segments beyond beer.”

“The key to growing awareness among retailers and consumers is attaching relevant sales promotion programming or incentives to special packaging and line extensions,” Patrocinio adds. “With the brightly colored Dos Equis Lime & Salt Variety Pack ... that attracts attention on shelf, branded merchandise to augment display, and consumer giveaways, there is opportunity for retailers to capture impulse purchase and incremental profits.”

Although young people have helped make seltzers a key part of the beer business, Marsha Everton, principal, corporate director and advisor at market researcher The AIMsights Group, notes that Millennial drinker enthusiasm might not last as it becomes more commonplace and less Instagrammable.

“It’s important not to lose focus on the cash cows of the alcoholic beverage business,” she observes. “Seltzer appears to have been strongly driven by off-premise consumption rather than being the beverage of choice in a bar or restaurant. With the return to social life outside the home, beer is taking share back from seltzer.”

Over the next five years, market research firm Mintel expects that the adult-beverage business will feel the effects of experiential shopping in e-commerce, and of interest in beer and cider made with sustainable ingredients, as well as nonalcoholic products developed for adults.

Mintel food and drink analyst Jenny Zegler notes that “beer and cider will continue to be shaped by consumer health consciousness and sustainability priorities. E-commerce emerges as a retail channel to watch.”