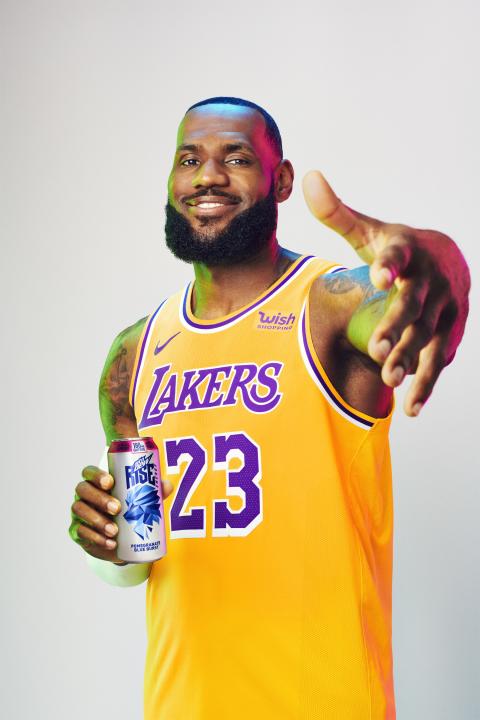 By all accounts, 2020 was a banner year for energy drinks.

“The segment has had strong growth during the past year, though our assortment is quite limited, as the category before was not as strong,” says Christine Dang, category manager at Los Angeles-based online grocer Thrive Market. “We are seeing this shift due to the fact that during the pandemic, there were more people at home who needed something to help boost their productivity.”

Indeed, this trend looks likely to outlive the virus. “Despite more people staying home due to the pandemic, the need for energy has never been stronger, and our insights show that consumers say they need more energy these days than before COVID,” asserts Paul Sheridan, senior director, global R&D sparkling, energy and foodservice at Purchase, N.Y.-based PepsiCo, maker of such brands in the category as Rockstar Energy Drink, which the company acquired last year and recently relaunched worldwide with a refreshed look, and the newly introduced Mtn Dew Rise Energy.

Although, according to Freck, “Growth has been coming equally from full-sugar and reduced-sugar offerings in the category, and equally from core products and flavor offerings from top brands … across can sizes and pack types,” many have observed that better-for-you beverages in this space are becoming increasingly popular.

“Consumers these days are looking for a natural and clean ingredient source of energy that doesn’t include the typical jitters and crashes you would get from a traditional energy drink,” explains Dang. “People are now also very conscious about the sugar content within their energy drinks, and they can also be concerned with caffeine levels as well. Retailers are meeting these needs by rethinking the category and focusing on products that try to gear towards a lower percentage of added sugar and caffeine, while also re-looking at the ingredients and focusing on ones that are plant-based.” 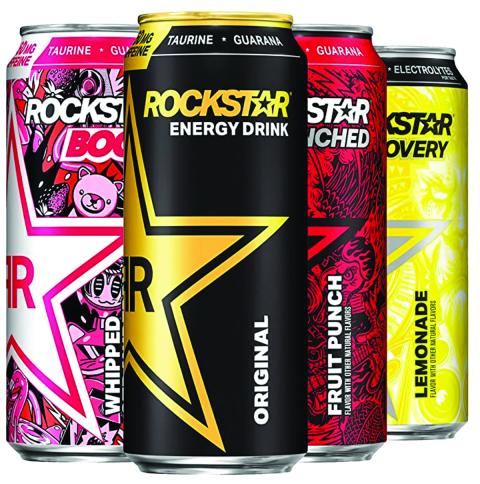 Some newer players in the segment have come out with energy beverages that specifically address these needs.

“Consumers want to know exactly what they’re consuming – they want to know and understand the ingredients they are ingesting,” notes Jeff Church, CEO and co-founder of Del Mar, Calif.-based Rowdy Energy, which is now carried in more than 22,000 stores nationwide. “We’re seeing that consumers are seeking healthier options and better-for-you alternatives when making purchases. There has also been a bit of a revolution in natural ingredient development that now allows beverage companies to offer consumers multiple need-states and benefits in a single drink, which is really exciting. Consumers and retailers shouldn’t settle for what they’ve always purchased – beverage choices can be highly functional today.”

According to Church: “The brand doesn’t use any artificial flavoring or sugars.All of Rowdy’s SKUs feature caffeine derived from green tea paired with the nootropic L-theanine, giving consumers a powerful lift without the unwanted and irritable crash.”

A variety of new SKUs and flavors are set to roll out later this summer, which will bring the brand’s SKU count to a total of 10, seven of them zero-sugar products and the rest reduced-calorie options. “While our zero-sugar products are the fastest-turning SKUs, our reduced-sugar SKUs contain only 18 grams of sugar compared to other leading brands that contain approximately 55 grams of sugar per can,” says Church, adding that Rowdy is “also working hard on a metabolism-boosting, calorie-burning line that we’re planning to pitch to retailers this fall for a Q1 2022 on-shelf date.”

“Current market data suggests that consumers are now looking for more better-for-you and much healthier alternatives within the energy drink space,” observes Raj Beri, CEO and founder of  Beverly Hills, Calif.-based Elegance Brands, which owns and created Sway Energy. “Manufacturers are meeting those needs by ensuring that we consider health benefits during formulation, with a focus on healthier lifestyles [and] zero-sugar and low-calorie options.”

The product line, which just launched in Mango, Strawberry, Passion Fruit, Watermelon, Orange and Lemon Lime flavors, “contains the recommended 100% daily value of vitamins A, B6, B12, C and D,” notes Beri. “Every can of Sway contains 160 milligrams of organic green tea caffeine that may improve brain function, aid in fat loss and reduce the risk of cardiovascular disease. Sway also contains essential minerals and amino acids such as magnesium, L-arginine, D-ribose and amino BCAA that help boost muscle formation, increase energy and aid in the body’s natural immune system. Sway has zero sugar and zero artificial flavors. Additionally, it is low in calories and carbs.” He emphasizes that “no other energy brand has focused on immunity,” making Sway unique in the category.

Among the larger energy drink players, PepsiCo has perfected the art of targeting shoppers by offering just the right beverage ingredients.

“Through our consumer insights, we found that the morning energy consumer had specific product needs that remained unaddressed until now,” explains Sheridan. ‘Mtn Dew Rise Energy is an energy drink for the morning energy seeker and includes the product benefits consumers asked for: citicoline with caffeine to boost mental clarity, zinc to aid immune support; antioxidants vitamins A and C and juice, and 180 milligrams of caffeine, equivalent to about two cups of coffee in every 16-ounce can, without the added sugar.”

He promises “exciting new flavors for [Rockstar and Mtn Dew Rise Energy] and partnerships that will allow us to remain connected with our target consumers throughout the year.” 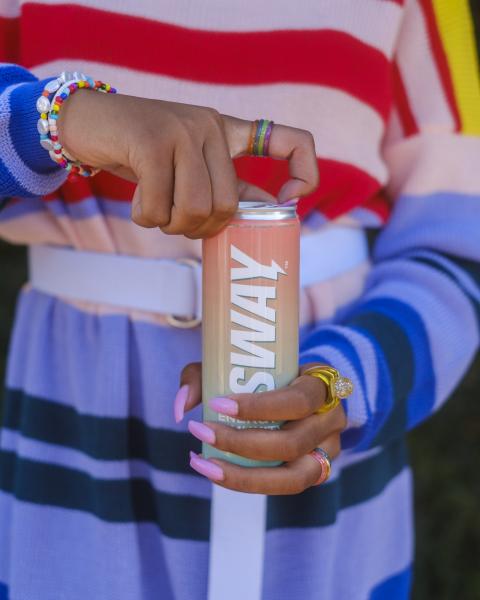 Sway Energy has a unique focus on immunity, according to its parent company, Elegance Brands.

Unsurprisingly, as e-commerce use shot up during the pandemic, retailers “shifted a lot of their focus to online sales, as less people are going to physical stores to stop by for a pick-me-up,” says Thrive Market’s Dang, who points out that her company is in a great position to retain those customers who were converted to online shopping and are interested in offerings such as better-for-you energy drinks.

“With products nowadays highlighting so many attributes, our platform contains values that are tagged to each specific product that our members can shop by or have listed out on the product page for ease of shopping,” she says. “Some of those included can be low sugar, plant-based, caffeine-free, etc. This has been successful, because our members can take a quick glance at a product and get an idea of what they are looking for. Our marketing emails are also a great way to introduce new products and educate and highlight the product benefits.”

Brands are also reaching out to consumers via the internet, as well as through in-store activations. “We are actively working on a digital campaign around retail and customized point of sale around our major partnerships,” notes Elegance Brands’ Beri. “In terms of how successful they have been to date, we are still in the evaluation phase, but trending well.”

“Red Bull continues to provide best-in-class options for shoppers in-store, with displays at critical interruption points and cold cans available for the critical moment of need,” says Freck, noting that the brand’s current limited-time offering, Red Bull Summer Edition Dragon Fruit, “has rapidly become the No. 1 growth item in energy drinks, repeating Red Bull’s legacy with having the No. 1 innovation item every year since 2017,” according to data from Chicago-based IRI.

“From a retail perspective, PepsiCo has an advanced capabilities set called pepviz, led by Jeff Swearingen and our demand accelerator team,” notes Sheridan. “Store DNA (sDNA) and Consumer DNA (cDNA) are two foundational data sets that we use to unlock granular growth for our brands. sDNA integrates everything we know about the outlets that sell or could sell our products, including external factors like footfall, shopper reviews, local points of interest, and internal factors like store format, sales, and execution data. cDNA does the same for the people who buy our products, including sociodemographics, likelihood to shop across different retailers and brands, their interests and media habits.”

This approach allows the company “to customize the retail shopping experience that every person has, not deliver a one-size-fits-all approach,” he explains. “With innovation like Mtn Dew Rise Energy, traditionally, we would have advertised it to a vast audience. But with pepviz, we’re able to identify who in the consumer set is interested in energy, functional benefits and morning beverages. We can take those customers and look at them on a map, and then tier stores based on importance and where they’re most likely to shop for this product. Then we lean in with marketing and merchandising for those locations, using AI to ensure people are engaging with the content and machine learning to make sure we are merchandising properly. We then work to optimize this experience over time, and this pepviz framework allows us to be much more refined in our merchandising strategies, ultimately resulting in better experiences for consumers and retailers.” 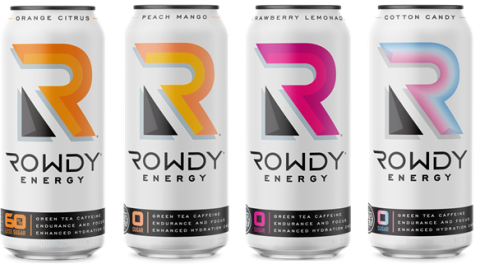 When asked where the better-for-you segment of energy drinks is headed, most observers are certain that it will continue to expand.

“I think we will see more drinks with an energy source that will include ingredients with more functionality such as a cognitive or calming focus,” predicts Dang.”People want to ingest products that serve multifunctionality – that can include things such as reduced stress, improved mental clarity, aids with digestion, etc. Consumer education on ingredients like adaptogens and nootropics that aid these functions will become more widely known.”

“We’re looking forward to innovating more in the energy space and delivering products with the functional benefits consumers are craving,” says Sheridan.

The near future of energy drinks will bring “more focus on the increased health benefits to the consumer, as consumers are trending to a more health-conscious lifestyle now and ahead,” notes Beri. “We will also continue to see household penetration grow within the energy drinks category, as there will be a greater focus on gaining Gen Z and female consumers [in] the category."

There has been much discussion in medical journals and beyond about just how healthy energy drinks are, particularly as regards to their caffeine content.

“We recognize our responsibility to market energy drinks responsibly, and we clearly label our energy products to provide information to the consumer regarding the caffeine content and additional ingredients,” says Paul Sheridan, senior director, global R&D sparkling, energy and foodservice at Purchase, N.Y.-based PepsiCo, whose brands include Rockstar Energy Drink and Mtn Dew Rise Energy. “Caffeine has been widely studied, and major global health organizations, including the U.S. Food and Drug Administration and the European Food Safety Authority, agree that caffeine is safe when used as a part of a normal diet. They do not discriminate between the caffeine in energy drinks and the caffeine in other contributors to daily intake such as coffee, tea, and chocolate.”

Adds Sheridan: “Caffeine in energy drinks typically ranges from 80 to 100 milligrams per 8 ounces. An 8-ounce cup of coffee contains, on average, 95 milligrams of caffeine.”

So, according to the major manufacturers, if you can tolerate a cup of coffee, you should be fine after downing a can of your favorite energy drink.

Despite considerable gains in the energy drink segment over the past year, there have been some setbacks: The Coca-Cola Co. said in May that it would discontinue sales of its highly touted Coca-Cola Energy drink in North America, which launched in the region just last year.

“As we emerge stronger from the pandemic, our strategy is focused on scaling big bets across a streamlined portfolio and experimenting in an intelligent and disciplined manner,” a spokesperson at the Atlanta-based company said in a statement supplied to Progressive Grocer. “An important component to this strategy is the consistent and constant evaluation of what’s performing and what’s not. As we scale our best innovations quickly and effectively like AHA and Coca-Cola with Coffee, we need to be disciplined with those that don’t get the traction required for further investment. It is for that reason we’ve made the decision to discontinue Coca-Cola Energy in North America.”