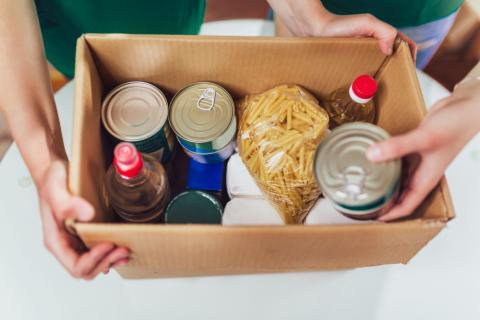 With demand at Florida food banks increasing upwards of 300 to 400%, Publix Super Markets is participating in a six-week program to support six of the state’s largest food banks with donations of pasta, canned vegetables, canned beans, cereal and boxed potatoes.

Approaching the holiday season, more than 2.7 million people in Florida — one in eight — are struggling with hunger.

“As federally funded food deliveries decrease, food banks need help to serve our communities,” said Paco Velez, president and CEO of Pembroke Park-based Feeding South Florida. “For decades, Publix has consistently looked for creative ways to support those in need. Their leadership in 2020 has played a vital role in sustaining our clients throughout this most challenging and unusual year.”

Chicago-based Feeding America is the nationwide network of 200-plus food banks that leads the fight against hunger in the United States. It provides food to more than 46 million people through 60,000 food pantries and meal programs in communities across America.

“When we heard from food banks that they were facing a critical food shortage, we knew that, as a food retailer, we had another opportunity to help,” said Publix CEO Todd Jones. “With 90 years of relationships and expertise, we are able to mobilize quickly — sourcing, purchasing and transporting what these food banks need most — and bring hope and nourishment this holiday season.”

Publix's new six-week program is in addition to the program it launched in April to purchase surplus produce and milk from farmers affected by the pandemic and deliver it directly to food banks. Through that program, Publix expects to purchase and deliver more than 18 million pounds of produce and 500,000-plus gallons of milk to Feeding America member food banks throughout the Southeast this year, including more than 7 million pounds of produce and more than 250,000 gallons of milk to the six Florida food banks receiving additional support this holiday season.

Privately owned and operated by its more than 200,000 employees, Lakeland, Florida-based Publix has 1,264 stores in Florida, Georgia, Alabama, Tennessee, South Carolina, North Carolina and Virginia. The company is No. 12 on The PG 100, Progressive Grocer’s 2020 list of the top food and consumables retailers in North America.