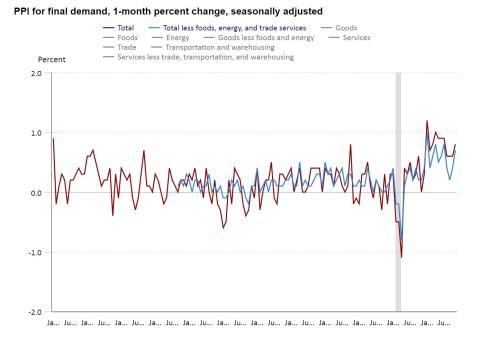 New reports out this week show that as inflationary pressures continue, consumers are feeling the pinch.

According to information released by the U.S. Bureau of Labor Statistics (BLS) on Dec. 14, the Producer Price Index for final demand jumped 0.8% in November and has risen 9.6% over the past 12 months. That is the highest rate since the government started calculating this kind of data in 2010.

BLS cited food, fuel, used cars and trucks and shelter as the main drivers of producer price hikes. The agency reported that the food index climbed 0.7% in November, with the rate for food for at home up by 0.8%.

Also this week, the Federal Reserve Bank of New York’s Center for Microeconomic Data shared findings from its latest survey of consumer expectations, revealing that expectations for short-term inflation were higher in November. Consumers expressed marked uncertainty about inflation outcomes, which increased for both the short-term and medium-term future.

As for their own habits, expectations for greater household spending in the year ahead rose to a new high of 5.7%. More respondents indicated that they are financially worse off than they were a year ago.

The Federal Reserve survey also pinpointed differences in consumer sentiments. People who make less than $50,000 a year have higher inflation expectations than those who earn more than $100,000. Older consumers – typically on a fixed income – have a more pessimistic outlook than their younger counterpoints; survey participants over age 60 predicted that inflation will remain at 6.1% in a year from now, compared to those under 40 who pegged the rate at 5%. From a geographic standpoint, consumers in the South and Midwest regions are the most concerned about the rate of inflation.