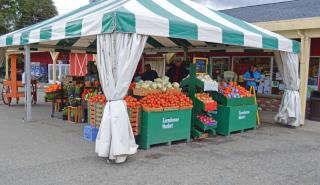 While most food retailers tend to have the same produce variety, it’s often one of the departments used to create distinction in the minds of consumers. How Farmhouse Market goes about that is where it sources its product.

“It comes direct from the farms in our truck,” says owner Jay Bluher. “We get whatever we can locally, based on what’s in season, of course.”

Every March for the past 12 years, Bluher and his wife, Melissa, have erected a 15-foot-by-30-foot tent in the parking lot right in front of the store’s doors.

“The first local produce isn’t available until mid-April, but we’ll still put it up,” Bluher says. “People get excited; that’s the first sign of spring, when they see the tent going up at Farmhouse Market.”

The tent remains up through the end of October, when pumpkin season fades away.

“Every June, people start asking when the local tomatoes, corn, cantaloupe or whatever their favorite is will be arriving,” he adds.

The bulk of the local produce, defined as originating within the state of Washington and coming from a handful of producers, is found within the tent, although products that need refrigeration are housed in the store’s year-round produce department. The in-store department remains stocked throughout the year, continuing to carry a full line of products, including those that can’t be sourced locally.

The Bluhers were a bit ahead of their time with the local movement, but the reason for their embrace of regional produce was the desire to be different.

“To have so much growing that close to home, it just doesn’t make sense to not use that and take advantage,” Bluher explains. “It’s just such a different product. Tomatoes, for example, when they’re coming in, picked that day, compared to something that’s being ripened in a truck while being transported.”