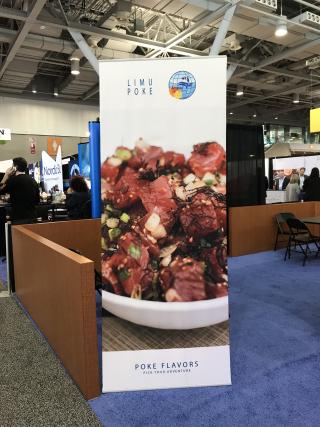 A poster of Annasea's Limu Ahi Poké at SENA

What I wasn’t prepared for when I hit the show floor on the first day of Seafood Expo North America (SENA), which ran March 17-19 in Boston, was the explosion of poké samples. Offerings ranged from Fijian albacore poké with nama shoyu sauce to poké-style herring to premium Norwegian salmon cubes served as poké.

At the Annasea booth, where the Redmond, Wash.-based brand was sampling its line of mix-and-serve poké meal kits in Sriracha Salmon, Shoyu Ahi, Albacore, Limu Ahi and Wasabi Ahi varieties, I talked briefly with National Sales Manager Kelly Martin, who agreed with my observation that sushi’s popularity had paved the way for mainstream Americans’ relatively easier acceptance of raw fish going forward – as witnessed by dishes such as the striped bass tartare I enjoyed at the Pacifico Aquaculture booth, and the servings of ceviche – Poké’s Latin American cousin –available at the Peruvian Pavilion.

Martin and I also concurred that as it spread to all corners of the country, poké would likely take on regional variations, in terms of seasonings and even species used. Still, as he noted, in Hawaii, rather than the rice or the toppings that get so much play in mainland versions of the Polynesian dish, “it’s about the fish.”

Poké even made an appearance off the show floor, during a presentation on consumer seafood trends by Mark DiDomenico, director, business development at Chicago-based market research firm Datassential. Discussing the progression of seafood megatrends from inception to adoption to ubiquity, DiDomenico placed poké squarely in the second category, along with the frankly delicious-sounding shrimp and grits, and identified it as first among trendy seafood dishes, which are experiencing a rising global influence. He also noted, however, that the time it takes for items to reach ubiquity is shorter – sped along by such spurs as the Food Network and a food truck (not necessarily selling tacos) on virtually every corner – so at this rate, it won’t be long before McDonald’s is offering its very own McPoké. 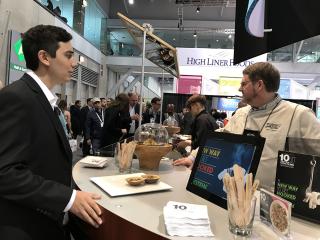 The Pull of Protein

Meanwhile, the massive popularity of protein was very much on everyone’s mind, since seafood is, of course, a protein, and a lean one at that. Although DiDomenico observed in his presentation that while consumers were eating less meat even as demand for protein increased, it was plant-based items that were getting most of the attention, the implication was that seafood suppliers and retailers should make a bid to capture the interest – not to mention the taste buds – of the alternative-protein crowd.

The best example of this – transcending the realm of seafood itself – was Seattle-based Trident Seafoods’ 10g Protein Noodles, made from wild Alaska pollock. Trident’s booth attracted a steady stream of attendees to come and try the unique product, which tasted like – noodles. That is to say, not fishy at all.