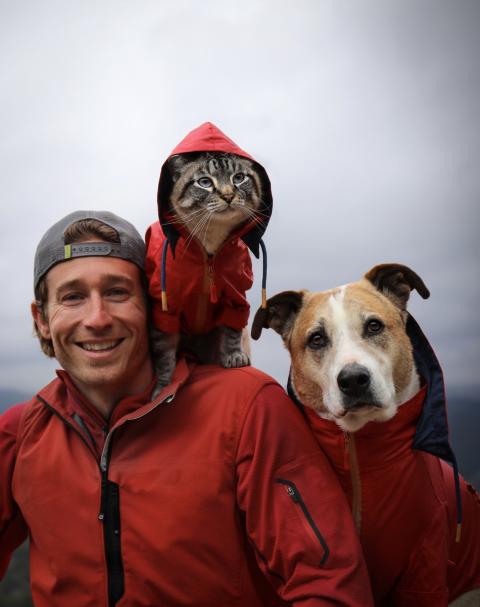 Pet families expanded during the pandemic, including this one taking part in Shipt and Purina's new pet lookalike promotion.

In time for National Pet Month in May, delivery service Shipt announced this week that it is teaming up with Nestlé's CPG brand Purina to offer a “Pet Lookalike” sweepstakes, through which consumers can win free pet food for a year.

The promotion, centered on the long-held notion that people often choose pets that resemble them, extends through May 24. To enter the contest, pet parents can upload a selfie with their pet on Instagram, tagging both companies and using the contest hashtag #ShiptLookalikeSweepstakes.

Whether or not their pet is their doppelganger, people have had more time to look at their pets’ faces since staying and often working at home. According to research from London-based Mintel, 63% of pet owners say they are spending more time with their pets as a result of the pandemic.

With the resumption of away-from home lifestyles accelerating, Shipt and Purina are also using this promotion to share tips for helping pet families adjust to the transition, like practicing new routines, putting on ambient noise in the background or adding pet cameras for remote interactions.

“As the world begins to open up, consumers expect more items to be delivered quickly and safely to their homes from retailers and brands they know and trust — and pet supplies are no exception,” said Molly Snyder, chief communications officer at Shipt.

The collaboration between Shipt and Purina isn't the only promotion for National Pet Month. Fort Lee, Virginia-basedDefense Commissary Agency, for example, is offering several product deals in May, including BOGO offers on select Purina products and savings on other brands such as Milo’s Kitchen, Nature’s Recipe, IAMS, Blue Buffalo and more. Walmart is promoting new products every week this month and Target is offering deals for both in-store and online purchases. Meanwhile, some of Kroger's Ralph’s grocery stores in California are hosting pet adoption events in their parking lots.

Minneapolis-based Target, the parent company of Shipt, is No. 7 on The PG 100, Progressive Grocer’s 2020 list of the top food and consumables retailers in in North America. Walmart U.S. is No. 1, while Kroger is No. 3 on The PG 100.