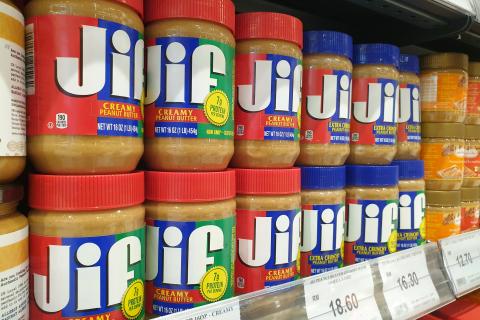 In the wake of a Salmonella outbreak, recalls of products made with Jif peanut butter has widened to include other CPG and store brands.

Consumers around the country have been checking their refrigerators, pantries and receipts to see if they have been affected by major recalls announced this month. Certain batches of Jif peanut butter and FreshKampo/H-E-B strawberries have been linked to illnesses in the U.S. and Canada, which spurred the high-profile recalls.

The U.S. Food and Drug Administration announced that fresh organic strawberries sold between March 5 and April 25 might be tied to a hepatitis A outbreak that has sickened nearly 20 people, many of them in California. While the berries under the wide-ranging recall are past their freshness date, some might have been frozen. In the meantime, the FDA is still working on identifying and tracing possible hepatitis A cases.

Although its store brand was cited in FDA's recall, H-E-B issued a statement emphasizing the safety of its products and disclosing that it has not received or sold organic strawberries from the supplier under investigation since April 16. "All strawberries sold at H-E-B are safe. No illnesses from strawberries related to the FDA investigation have been reported at H-E-B or in Texas," the retailer reported.

In another headline-making food safety situation, several Jif brand peanut butter products have been recalled due to an outbreak of Salmonella Senftenberg across several states. The U.S. Centers for Disease Control (CDC) reported that a J.M. Smucker plant in Lexington, Ky., is the “likely cause of illnesses” in this foodborne illness outbreak. The Jif recall includes Jif products with lot code numbers between 1274425 – 2140425, with the first seven digits ending with 425.

In addition to products from the Jif brand, other products made with peanut butter produced by J.M. Smucker have been voluntarily recalled. According to FDA’s website, these recalls include snack packs from A.G. Specialty Foods, confections from Coblentz Chocolate Cos., snack packs from Garden Cut, LLC and Fresh Seasons power packs from Taher, Inc.

In a separate announcement, Albertsons Cos. said that it is pulling 11 store-prepared items at banners including Albertsons, Safeway, Lucky, Haggen, Carrs-Safeway, Eagle, Tom Thumb, United, Amigos, Market Street, Albertsons Market, Andronico's Community Markets, Vons, Pak 'N Save, Shaw's, Star Market, Randalls, Vons, Jewel-Osco, ACME, King's and Balducci's.  “There have been no reports of injuries or adverse reactions due to consumption of these products,” the company noted.

Giant Eagle, for its part, issued a recall of several bakery items containing peanut butter, sold at some of its locations in Pennsylvania. “The recalled items were sold in the bakery departments of the three Giant Eagle stores only and most guests who have purchased the impacted product have already been contacted directly. The recalled items were sold in 120 transactions total. There have been no reports of illness associated with this recall to date,” the announcement read.

Boise, Idaho-based Albertsons operates over 2,200 retail stores with 1,722 pharmacies, 402 associated fuel centers, 22 dedicated distribution centers and 20 manufacturing facilities, and is No. 9 on The PG 100, Progressive Grocer’s 2022 list of the top food and consumables retailers in North America. Pittsburgh-based Giant Eagle operates more than 470 stores throughout western Pennsylvania, Ohio, northern West Virginia, Maryland and Indiana and is No. 36 on The PG 100. San Antonio-based H-E-B operates more than 400 stores in Texas and Mexico and is No. 16 on the list.