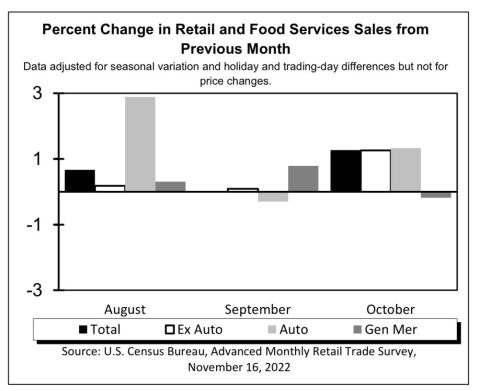 The U.S. government reported higher retail sales for the month of October, with overall sales ticking up 1.3% from the previous month. Beating analyst expectations, the advanced estimates from the Census Bureau reflect both higher prices and still-steady consumer spending in the face of inflation.

The month-over-month increase comes after a flat showing in September.  Although cars and fuel helped propel the higher figures, retail spending excluding those items still went up by 0.9% last month.

The grocery sector experienced gains on a monthly and year-to-date basis. For the first 10 months of 2022, grocery retail sales have climbed 8.3% to reach nearly $698 billion. Adjusted sales in October topped $72.5 billion at grocery stores, rising 1.4% from nearly $71.6 billion in September and just over $71 billion in August. From a year-over-year standpoint, retail grocery sales came in 8% higher than in October 2021.

Likewise, the National Retail Federation (NRF) reported a 1.3% hike in retail sales during October, noting that consumers still bought everyday items and got an early start on the holidays. According to NRF, core retail sales excluding vehicles, gas and food service, edged up 0.7% from the previous month, while grocery and beverage store sales came in 1.4% higher than last year and 6.8% stronger than in October 2021.

“October retail sales data confirms that consumers continue to stretch their dollars on household priorities, including gifts for family and loved ones this holiday season,” remarked Matthew Shay, NRF’s president and CEO.

Stronger sales in October come on the heels of slightly easing inflation. Although the U.S. government's Consumer Price Index for food at home rose 0.4% last month, it was the smallest monthly gain since December 2021 and nearly half the rate of the 0.7% increase in September.

All eyes are on the Federal Reserve and how much that entity will raise interest rates in December to cool inflation, now that some indicators are pointing to a less steep inline. The central bank raised the rate by a 0.75 percentage point at each of its recent four meetings, and analysts are expecting another lift that could be between a half point and a full point in an effort to avoid a painful recession.