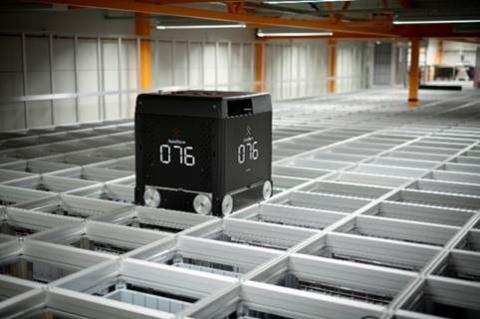 In AutoStore's system, storage bins are stacked vertically in a grid and stored in a cubic structure, with the bins retrieved by robots that travel on top of the structure.

AutoStore, a Norway-based provider of automated storage and retrieval systems (AS/RS), has filed patent infringement lawsuits in the United States and the United Kingdom against e-grocer Ocado Group Plc.

The suits seek court orders barring Ocado and its U.K. partner Tharsus Group from manufacturing, importing, using and selling technology that infringes AutoStore’s patents, as well as monetary damages. These moves could potentially jeopardize Ocado’s plans to launch its platform in the United States with Cincinnati-based grocer Kroger, with which the e-grocer is planning to roll out up to 20 customer fulfillment centers (CFCs) and perhaps even its already live partnership with Canadian food retailer Sobeys, although to date, no lawsuit has been filed against Ocado in Canada.

“Since 1996, AutoStore has developed and pioneered technology that has revolutionized retail storage and order fulfillment, and is driving the growth of online retail,” said Karl Johan Lier, CEO and president of Nedre Vats, Norway-based AutoStore. “Our ownership of the technology at the heart of Ocado’s warehousing system is clear. We will not tolerate Ocado’s continued infringement of our intellectual property rights in its effort to boost its growth and attempt to transform itself into a global technology company.”

AutoStore’s automated storage and retrieval systems are used by warehouse owners and operators. AutoStore currently supports more than 500 installations and 18,000 robots in 30 countries, serving such markets as grocery, health care and aviation for customers that include ASDA in the United Kingdom, Best Buy in the United States, and Lufthansa in Germany. Ocado is also an AutoStore customer, having first purchased the company’s technology in 2012.

According to AutoStore, Ocado used AutoStore’s AS/RS intellectual property, including its storage system and robots, to create the Ocado Smart Platform (OSP), on which its business is based. This technology is deployed in Ocado’s CFCs for its own online grocery business and for that of its customers, including Kroger.

The suits further allege that Ocado’s OSP infringes several AutoStore patents, among them those relating to the fundamental central cavity design of the AS/RS robots; the arrangement of the lifting mechanism that enables those robots to lift and place bins in their cavities; and the robots’ in-wheel motors.

A Norwegian court has already found that AutoStore is entitled to ownership of its patents covering the robots’ central cavity technology.

Cincinnati-based Kroger employs nearly half a million associates who serve 9 million-plus customers daily through a seamless digital shopping experience and 2,757 retail food stores under a variety of banner names. The company is No. 3 on The PG 100, Progressive Grocer’s 2020 list of the top food and consumable sretailers in North America. Stellarton, Nova Scotia-based Sobeys Inc. is No. 21 on PG's list.