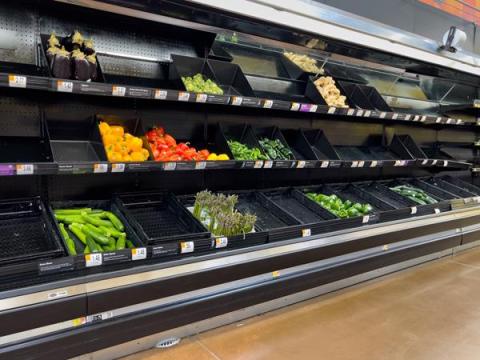 Without action, water shortages will lead to less food production, food shortages and price hikes, according to the California Farm Water Coalition.

Almost the entirety of California is currently classified as undergoing a severe or extreme drought, according to May data released by the National Drought Mitigation Center at the University of Nebraska-Lincoln. Without action, the California Farm Water Coalition says that these water shortages will lead to less food at grocery stores.

The California Farm Water Coalition is a nonprofit, educational organization that provides fact-based information on farm water issues to the public. According to the organization, the water shortages that continue to plague California are increasingly affecting the number of acres devoted to growing much of the nation's fresh food.

As reported by the Associated Press, farmers in central California will be getting little to no water again this year from a key water system amid the current drought.The Bureau of Reclamation recently said that it will not be able to provide some farmers with water from the Central Valley Project, a vast system of dams, reservoirs and canals that it oversees in the state. That means farmers in the agricultural region that produces much of the country's fruits, nuts and vegetables will again need to find other water sources — or leave land idle as many have done in recent years.

"New estimates are emerging on the number of acres without enough water to grow food, and it doesn't look good," said Mike Wade, executive director of the Sacramento-based California Farm Water Coalition. "We believe the state could see as much as 691,000 acres taken out of production this year, a 75% increase over last year and 151,000 acres more than the previous high in 2015."

Data from the U.S Department of Food and Agriculture shows that 80% of U.S.-produced fruits, nuts and vegetables are grown west of the Rockies.

"It is not an accident that so much of our food supply comes from the West, and in particular California," said Bill Diedrich, president of the California Farm Water Coalition. "California's climate is unique and not replicated in any other state. Most other states have more significant weather extremes, higher altitudes, oppressive humidity and, in some cases, too much water.

Diedrich also explained that California hasn’t adapted to changing weather patterns. "Because more of our precipitation now comes in the form of rain instead of snow, we need to build both small and large storage projects to capture the water when Mother Nature delivers it," he said.

According to the California Farm Water Coalition, to meet future needs, California must invest in additional conservation and recycling ,as well as new supplies that can be stored in reservoirs or groundwater aquifers and moved efficiently to parts of the state where they're needed.

"In addition to lack of storage, our water policy has also failed to adapt and remains mired in outdated science and cumbersome bureaucracy," said Diedrich.

His organization estimates that up to 40% of California's irrigated cropland will receive little or no surface water this year.

"Immediate action is necessary because by the time the grocery shelves are empty, it will be too late," he added.