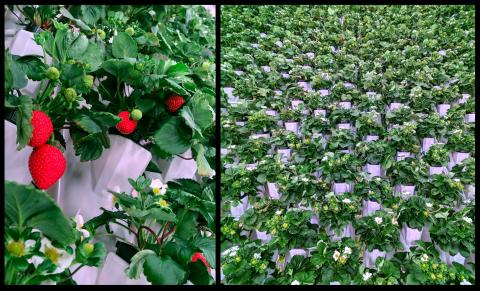 Driscoll’s and Plenty have committed to build their first commercial strawberry indoor vertical farm in the Northeast.

After exceeding the goals for the initial stages of the partnership, the two companies are accelerating efforts to grow Driscoll’s berries using Plenty’s vertical growing platform. According to Driscoll’s, the new farm, created to serve consumers in the northeastern United States, will provide fresh, consistent, high-flavor strawberries closer to residents in highly dense urban regions.

“Over the last year, Plenty has demonstrated its technological leadership in indoor vertical farming by growing our proprietary strawberries to meet the rigorous flavor and quality required of a Driscoll’s berry,” said J. Miles Reiter, chairman and CEO of Watsonville, Calif.-based Driscoll’s. “We are excited to see the initial success of our collaboration and look forward to expanding our relationship with a new farm that will drive category growth to the northeastern part of the U.S.”

Driscoll's indicated that more details on the location and start date of operation for the new farm will be forthcoming.

“The Northeast is the largest berry consumption region in the U.S., with a dense population of berry-loving consumers,” said Arama Kukutai, CEO of Plenty, which has its headquarters in San Francisco. “Our partnership with Driscoll’s, coupled with Plenty’s optimized technology platform, ensures we can consistently grow premium berries closer to where these consumers live, providing fresh, consistent quality. We’ve successfully leveraged the expertise of the world’s largest strawberry-breeding program within Plenty’s own controlled growing environment, maximizing the flavor of each berry and optimizing for both texture and size. We’re excited to bring our first indoor vertical farm dedicated to strawberries to life with the undisputed leader in the space.”

Plenty made headlines earlier in the year when retail giant Walmart signed an agreement to invest in the company. Walmart’s equity investment is part of a broader strategic partnership to use Plenty’s farming technology platform to deliver fresh produce to Walmart retail locations. The retailer will be able to source Plenty’s leafy greens from the indoor-farming company’s Compton farm in California, which Plenty is currently building, to all Walmart stores in the Golden State.