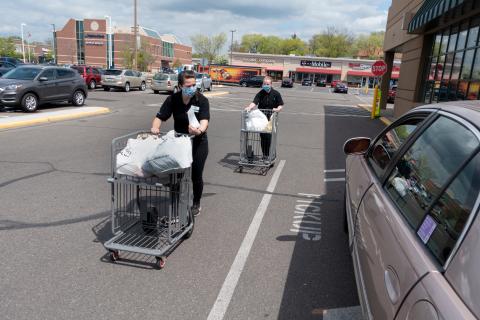 A recent study has found that grocery employees with direct customer exposure had a five-to-one chance of testing positive for SARS-CoV-2, the virus that causes COVID-19.

A newly released study of a supermarket in Massachusetts suggests that grocery store work may be putting workers at serious risk for infection from COVID-19.

The study, published this week in the journal "Occupational and Environmental Medicine," found that among 104 workers tested for COVID-19 in May, 20% had positive nasal swab tests. Even more telling is that 76% of the cases were asymptomatic.

Employees with direct customer exposure had a five-to-one chance of testing positive for SARS-CoV-2, the virus that causes COVID-19. Meanwhile, the infection rate at the Massachusetts grocery store was significantly higher than that of the surrounding communities, according to the authors of the study.

Nearly all the workers -- 91% -- said that they wore a face mask at work, and 77% said  that they also wore masks outside of work. Yet only about 66% said that they were able to practice social distancing consistently on the job.

As for mental health, the prevalence of anxiety and depression among the workers was 24% and 8%, respectively. Those able to practice social distancing consistently at work had significantly lower risk of anxiety or depression, the study found.

More than 90% of employees with positive test results had a position with significant direct exposure to customers. The study also found that employees in supervisory positions, with exposure from both customers and colleagues, had increased SARS-CoV-2 exposure risk.

Notably, most of the SARS-CoV-2-positive assay workers were asymptomatic at the time of testing. The authors of the study cited evidence that has shown probable transmission from asymptomatic or mildly symptomatic carriers.

"These workers as a cluster [present] significant risk to their customers, colleagues and families," they said. "Our findings further strengthen the retail cluster transmission observed in a previous study from China, which involved supermarket employees, clients and the families of affected cases, resulting in an infection rate of 9.2% among the market workers."

The Washington, D.C.-based United Food and Commercial Workers International Union (UFCW) has estimated that at least 108 grocery workers have died and that more than 16,300 have been infected or exposed to COVID-19.

Dr. Justin Yang, an assistant professor at Boston University School of Medicine and a researcher at Harvard School of Public Health who worked on the study, was quoted in a CNN report as saying he hopes this study prompts the government and store owners to provide better guidance, routine testing and protection for grocery store workers.