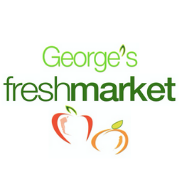 The town of North Chicago may be within the orbit of metropolitan Chicago, but it has been considered a food desert for years. That changed this month, when George’s Fresh Market became the first full-service grocery store to open in almost two decades in this working-class, largely industrial community along the Lake Michigan shoreline.

The 15,000-square foot store, founded by grocery industry vet Peter Dremonas and Chicago restaurateur George Anderson, is now serving customers throughout the northern reaches of Illinois along the Lake Michigan shoreline. Dremonas and Anderson are childhood friends who wanted to pool their retail and foodservice experience to create a destination for fresh, budget-friendly foods in an underserved area.

In advance of the opening, the independent retailer held a job fair over the summer and was close to being staffed as of September, according to its social media pages.

Dremonas told public television station WTTW earlier this year that he and Anderson saw a need and wanted to offer residents access to fresh, quality products. “We’re going to offer fresh produce from across the world – that’s going to be our highlight, of course,” he said. "We’re going to have various different meats – we’ll have beef, pork, chicken, lamb, goat. We’ll also have some halal; we are going to have seafood as well, from all across the world.”