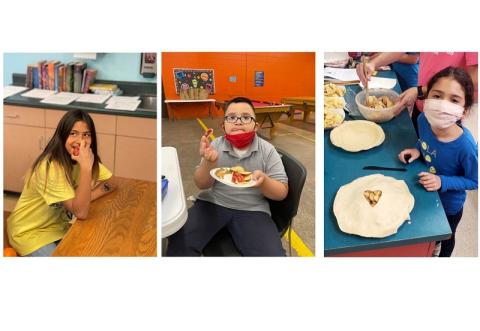 During the hotter months, fresh food donations are harder to come by, yet they are crucial to help keep families with children from going hungry, especially when kids are out of school for summer.

Bashas' is doing its part to make sure that families don't go hungry during one of the hottest summers on record.

The Arizona-based grocery chain recently donated more than 11,000 pounds of Red Delicious apples – 11,520 pounds, to be exact – equaling more than eight pallets of apples that were distributed to a dozen different food banks and local nonprofits throughout the state.

During the hotter months, fresh food donations are harder to come by, yet they are crucial to help keep families with children from going hungry, especially when kids are out of school for summer. Bashas’ and Food City supermarkets recently donated thousands of apples to:

“This is the first time we have had so many organizations benefit from the donation, which allowed us to cover all parts of the state,” said Edward “Trey” Basha, president and CEO of Bashas’ Family of Stores. “This apple donation helps to put a sizable quantity of fresh produce into the hands of those who could use it the most.”

The apple donations are all part of an annual Take a Bite Out of Hunger collaboration that Bashas’ and Food City supermarkets have with FirstFruits, which is based in Washington state.

“We all know this has been a tough year, and we feel fortunate to be able to continue making our annual apple donations, now more than ever,” said Joe Vargas, director of marketing for FirstFruits. “We are grateful for the support and partnership we receive from Bashas’ and Food City to donate thousands of pounds of apples every year.”

FirstFruits created its Take a Bite out of Hunger donation program to help feed the underserved while bringing attention to the problem of food insecurity in the United States. In Arizona, as many as one in seven people struggle with hunger, and the number of hungry children is higher yet. About one in four Arizona children – nearly 435,000 youth – experience hunger or do not have regular access to safe, affordable, and nutritious foods.

“We are so grateful for the opportunity to share more than 4,000 fresh and delicious apples with the young people and families we serve,” said Karin Malbrough, VP of program operations of Boys & Girls Clubs of Tucson. “This donation helps to support their confidence and motivation to make healthy choices and maintain healthy habits.”

This is the fourth year that Bashas' has participated in the give-back campaign. Bashas’ and Food City earned the donation based on the number of apples procured for distribution across the state during the first quarter of 2021.

Bashas’ Supermarkets Inc. is a family-owned company based in Chandler, Ariz. Its brands include Food City, AJ's Fine Foods, Eddie’s Country Store, and both Bashas’ and Bashas’ Diné supermarkets. The company is No. 78 on The PG 100, Progressive Grocer’s 2021 list of the top food retailers in North America.