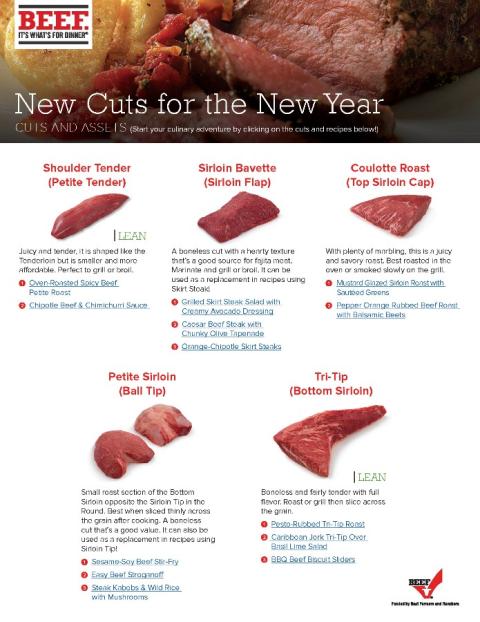 The annual What's Hot culinary forecast released by the National Restaurant Association named "new cuts of meat" as the top trend for 2018.

Accordingly, the chefs and meat scientists of the National Cattlemen’s Beef Association’s (NCBA) “Beef. It's What's For Dinner” Culinary Center have put together a list of the top five innovative cuts that should be showing up more often in grocery and foodservice:

While many of these cuts are available to the home cook, some are just starting to gain popularity in restaurants.

"If you like brisket, you might want to try a Tri-Tip Roast. Or, if you're in the mood for strip steak, you will probably enjoy the Coulotte," explains Chef Laura Hagen, senior culinary director for Denver-based NCBA, a contractor to the Beef Checkoff Program. "It's exciting to see innovative cuts gain popularity across the country. Diners and home cooks shouldn't let a name they don't recognize keep them from trying something new."

The new BeefItsWhatsForDinner.com website has a section dedicated to beef cuts with details on everything, including where the cut comes from, how to cook it and similar cuts that can be substituted.

The new year may be the perfect time for consumers to try a new cut of beef or a new beef recipe. With more than 60 percent of whole-muscle beef cuts considered lean and commodities experts predicting beef prices to decline in 2018, it will be easier for consumers to enjoy beef all year long.

Established as part of the 1985 Farm Bill, the Beef Checkoff Program assesses $1 per head on the sale of live domestic and imported cattle, in addition to a comparable assessment on imported beef and beef products. States may retain up to 50 cents on the dollar and forward the other 50 cents per head to the Cattlemen's Beef Promotion and Research Board, which administers the national checkoff program, subject to USDA approval.

The Beef Checkoff Program is administered by the Cattlemen's Beef Board, with oversight provided by the U.S. Department of Agriculture.