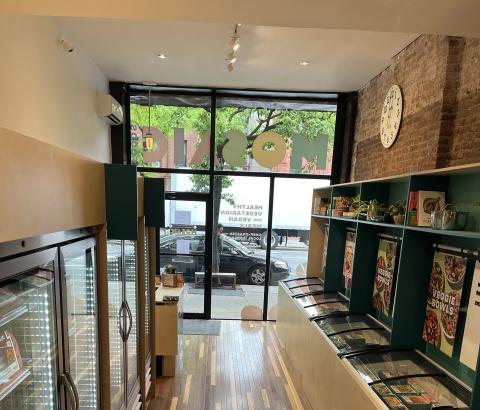 View of the Mosaic Foods Market pop-up store in Brooklyn, N.Y., from the inside.

Other items include the company’s signature offerings, among them bake-and-serve family meals, veggie bowls, a line created in collaboration with well-known local chefs, and single-serve soups and oats. All items are vegetarian, while about 70% are vegan. They come packed in dry ice and can be cooked from frozen, with many of the items ready after about five minutes in the microwave.

According to co-founder Matt Davis, who was previously senior director of operations at New York-based meal kit company Blue Apron, the idea behind Mosaic is “to make plant-based eating as easy as ordering takeout.” To create the flavorful meatless dishes, Culinary Director Christine Malanga works closely with the company’s production team in Woodland Park, N.J., which is headed by a classically trained chef.

Co-founder Sam McIntire added that the company, which he considers a grocer, runs its own kitchen and handles its own distribution, quipping, “We do everything but grow our own produce.”

The reason for the pop-up store is to get face-to-face consumer feedback on Mosaic’s products, which will include assessing reaction to the exclusive in-store items. “We really want to be able to talk to customers,” explained McIntire. “Knowing them deeply is a competitive advantage.” As a result of the customer feedback so valued by the company, Mosaic Foods Market was set up to offer people the opportunity to try the company’s items without the commitment of its standard online subscription.

Of particular importance for Mosaic is working with local communities. As McIntire noted, “Good food comes from collaboration – it’s an opportunity for us.” Among those opportunities was the creation of Mosaic +, a line of meals developed with local chefs and social media influencers during the pandemic to help Brooklyn restaurants that had been forced to shut down. According to McIntire, the most popular item in the six-SKU line is Mac & Greens, created by Greg Baxtrom, of nearby farm-to-table eatery Olmstead, and featuring “half cheese and blended veggies.”

Sustainability is another focus – McIntire said that all of Mosaic’s packaging is either curbside recyclable or made with post-consumer recycled fiber. Additionally, the ice packs it uses disappear naturally, leaving practically no trace. Having everything frozen is good from a food waste perspective, observed McIntire, as it ensures that food can be preserved until it’s ready to be eaten.

The company also partners with other startup brands, including Truff Hot Sauce, made with a blend of real black truffles and red chili peppers for a unique flavor.

While Mosaic currently ships its frozen products to the East Coast, California and a few other areas of the United States, the goal is to go national, and efforts such as pop-up stores in strategic areas may help that effort by generating buzz. As for eventual placement of the company’s products in other retail stores, both co-founders considered that to be “not off the table,” although no timeline was given for such a move.

The first 100 customers at the Brooklyn store on its official opening day of May 20 will receive a free Mosaic Foods Market insulated reusable tote and a complimentary smoothie worth $13 (the smoothies are due to debut officially in June). The brand will use the space, which McIntire said would be open for at least six months, to sample products, hold cooking demos, host special giveaways, offer branded merchandise for purchase, and other activities.