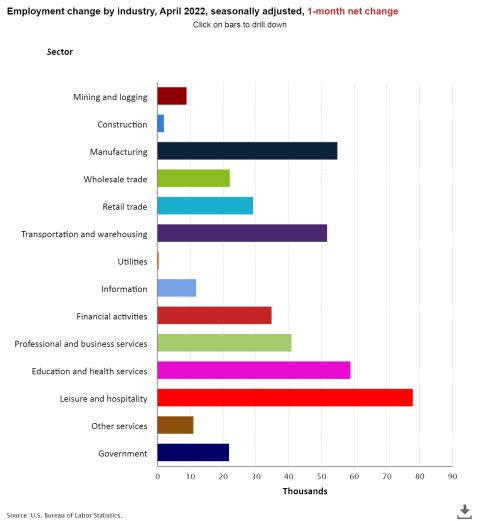 It’s a bit of a whack-a-mole situation in the labor market right now, reflecting the ongoing state of disruption in business environments. The U.S. Bureau of Labor Statistics (BLS) reported that that the U.S. market added 428,000 jobs in April, but indicated that the general worker pool has contracted, with a participation rate that dipped from 62.4% to 62.2% last month.

In other examples of good-bad news, the BLS confirmed that more people are returning to work as the pandemic ebbs, the jobless rate held steady at 3.6% and hourly wages rose again in April. According to the government’s latest report, average hourly earnings for all employees (nonfarm) increased 0.3% in April and are up by 5.5% over the last 12 months.

At the same time, however, wide-ranging labor shortages continue to impact the economy and industries such as food retailing. In addition to causing headaches for grocers already grappling with supply chain issues, the inability to fill jobs can exacerbate inflationary pressures at a time when high prices are already squeezing retailers and shoppers. The inflation rate reached a 40-year high of 8.5%, in March, based on the most recent Consumer Price Index (CPI) data.

Beyond volatile macro trends, the BLS shared updates on the grocery labor market. Food and beverage stores added 24,000 jobs in April, double that of the 12,000 new workers on the payroll at general merchandise retailers, but below the 44,000 added in dining and drinking establishments.

Over in the transportation and warehousing part of the supply chain, employment rose by 52,000 last month. Those improvements were led by more jobs in warehousing and storage, a sector that's now up by 674,000 employees compared with pre-pandemic February 2020.

In this tenuous climate, one analyst emphasized the continued importance of attracting and retaining workers in relevant ways. "The market remains more of a job seeker's market, but with the rise of inflation and the increased cost of living, higher/fairer pay is top of mind for employees," said Cody Harker, senior director of strategy and insights at New York-based recruitment marketing firm Bayard Advertising, in an interview with the International Business Times. "We are seeing a majority of workers leaving and switching jobs in search of higher wages and better cultural perks in order to keep up with inflation."