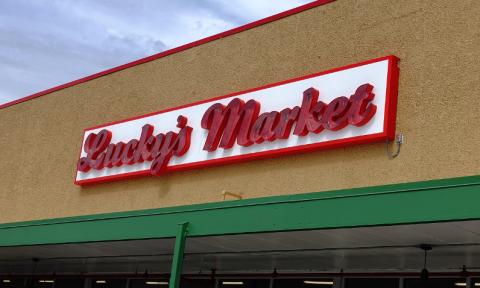 Shoppers in these markets will have access to an assortment of quality groceries and everyday household essentials through the service, including items for which Lucky's is known such as a wide selection of "never ever" meats, house-smoked bacon from the in-house butcher, ready-to-eat meals made daily in the store's kitchen, grab-and-go sushi bars, olive bars and more. The service will expand early next year to additional communities in the Midwest and new store locations slated to open in quarter one of 2019.

The service's launch gives more than 10 million households access to Lucky's products in as little as an hour without the need to drive to the store. Annual membership costs $49 for a limited time in the new metros with the service, almost half the cost of the traditional annual membership. Customers also will be able to apply their Lucky's Rewards to online orders.

"Lucky's Market was founded on the idea that healthful foods should be more available to more people," said Ben Friedland, VP Marketing for Lucky’s Market. "Through this partnership, Lucky's Market Delivers makes shopping for good food more convenient in the communities we serve. We are thrilled to be offer more choices and be a better resource to our customers through the Shipt platform."

Lucky's made news earlier this month when it revealed signed leases for additional store locations in Florida. The grocer is slated to open one store each in Kendall, Bradenton, Brandon and Clearwater, as well as two in Boca Raton, over the next 18 to 24 months.