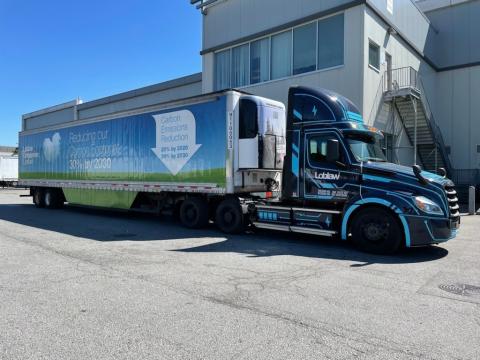 Loblaw took an important step on its journey to move its corporately-owned trucking fleet to electric vehicles by introducing Freightliner eCascadia.

The fleet electrification movement gets more momentum with Loblaw Companies Ltd.'s introduction of the Freightliner eCascadia from Daimler Trucks North America to routes in British Columbia. The Canadian company first trialed the battery-electric eCascadia in early 2020 as part of Freightliner's Customer Experience (CX) fleet. Now, Loblaw has placed an initial order for five vehicles to be delivered in 2022/2023.

Loblaw will continue utilize the CX fleet eCascadia for the next three months in and around the South Surrey, British Columbia area. Typical routes the eCascadia runs include distances between 160km to 250km, primarily hauling grocery and other retail products from the company's distribution center to stores. Data generated from the daily operations will help inform the continual development of electric vehicles.

Loblaw’s green move follows Albertsons’ historic announcement about carrying out the country’s first commercial 100% zero-emission refrigerated grocery delivery using a class 8 battery-electric truck and refrigerated trailer. The delivery was made at an Albertsons location in California on May 28.

"With approximately 10,000 deliveries to and from our stores each week, we understand the impact our fleet has on the environment. We know that through our own actions, we can play a critical role in helping Canada reach its carbon reduction targets," pointed out Brian Springer, VP, transport operations at Loblaw. "Over the past few years, we have worked closely with our partners to reach our goal of fully electrifying our corporate fleet by 2030. Our partnership with the Daimler Trucks North America's eMobility group is an important piece in that overall commitment."

In January 2020, Loblaw participated in a demonstration of the eCascadia, loaded to 80,000 pounds of gross weight. Overall impressions were positive, and leadership saw immediate potential for electric vehicle usage in operations. One in five Loblaw trips run about 150km from a distribution center, which easily fits within the production eCascadia's planned 400km range capability.

"As always, collaboration with our customers is critical to understanding how commercial battery electric trucks will be part of a long-term solution in CO2-neutral transportation," said David Carson, SVP of sales and marketing at Portland, Ore.-based Daimler Trucks North America. "We are excited for Loblaw's trial and for feedback that aids in the purposeful innovation of our electric vehicles."

Loblaw delivered a strong financial performance in the first quarter ended March 27, reporting revenue of CAN $11,872 million. This represented an increase of $72 million, or 0.6% when compared with the first quarter of 2020.  The company will release its second quarter 2021 results on July 28.

Loblaw Cos. Ltd. operates more than 2,400 stores in Canada with more than 190,000 full- and part-time employees. The Brampton, Ontario-based company is No. 12 on The PG 100, Progressive Grocer’s 2021 list of the top food and consumables retailers in North America.