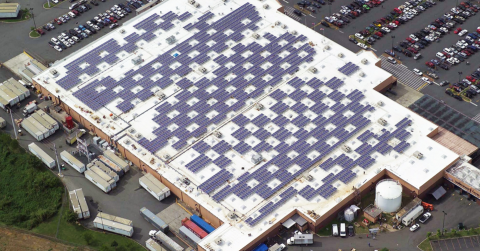 This EDPR Walmart rooftop solar generation installation is one of among 65 projects that the company has completed with the retailer.

Grocers today have an array of choices when they’re looking to boost energy efficiency and their contribution to sustainability, some of which require relatively little to no investment, with the chance to choose among options that best suit their businesses.

Although building rooftop solar arrays is an impressive way of developing a green energy operation, the costs are high and the solution inappropriate for many grocery businesses north of the Mason-Dixon line that don’t get enough sun to justify the cost. Yet solutions that allow businesses to buy into existing and developing green power generation can enable grocers to meet their sustainability goals in an effective way.

Solutions are not one size fits all, however. Weather is one but not the only factor that can change the way that food retailers need to approach energy efficiency and sustainability. From state to state and, sometimes, utility to utility, rules and incentives differ, and although some general principles exist, putting them into play requires understanding what requirements and benefits accrue to any given location.

Despite that, food retailers can make a start toward their energy goals by looking at what they can do in stores and without reference to outside agencies, according to Jonathan Tan, co-founder of the Ratio Institute, based in Santa Cruz, Calif. Tan adds that grocers can begin the process by looking at their own operations, including lighting, to see where they can improve their energy and sustainability positions.

Today, many food retailers have embarked on ambitious projects to boost their sustainability quotient. The Ratio Institute recently aided Ahold Delhaize USA banner Hannaford Supermarkets on a project that includes certification of its sustainability operations. In April, Scarborough, Maine-based Hannaford said that it planned to become fully powered by renewable energy by 2024.

The grocer’s plans include energy reduction, a goal complicated by the dual needs for lighting and refrigeration. Therefore, Hannaford initiated energy efficiency projects using not only LED lights, but also sunshades, doors on cases and state-of-the-art refrigeration systems. It has also added rooftop solar on 10 of its stores. Since that’s only a small proportion of Hannaford locations, the banner has been working with 30 community solar projects in Maine, Massachusetts and New York.

Tan notes that the Ratio Institute also is working with Ahold Delhaize USA, reviewing with it the potential for solar installations at several of the company’s distribution centers. 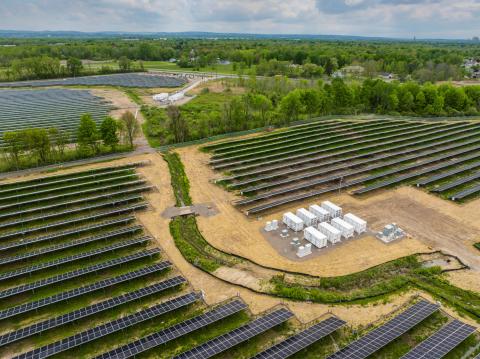 Of course, developing solar generation requires capital investment and may be more than a business can afford. Companies can lease solar generation equipment to minimize the capital that has to be committed, however.

This approach allows all electricity customers to benefit from the monetary savings and environmental benefits of solar energy without having to install and invest in solar panels, explains Kate Siskel, SVP, marketing and communications for New York-based Convergent Energy + Power.

Power is generated by a Convergent-owned and -operated solar-plus-storage system that clients subscribe to, with no capital investment, notes Siskel.

“The partnership means that Tops will pay less money for cleaner energy,” she says. “Because the community solar system provides more energy than is needed by Tops, the broader community will also be able to access this solar energy.”

Further, the battery component of the system allows food retailers partnering with Convergent to store solar energy when there’s a surplus and apply it when needed.

“Community solar-plus-storage projects are a great way for businesses, especially the retail/grocery sector, to lower their overall carbon footprint and electricity costs at the same time,” contends Siskel. “In some states, businesses are able to trade state Renewable Energy Credits that offer monetary and/or environmental incentives that bolster corporate social responsibility strategies and targets.”

For food retailers who can’t carry the cost of solar generation and/or live in areas of the country where less solar generation is possible, solar-plus-storage systems are an alternative that can satisfy their specific needs. In that way, food retailers, and other businesses and communities in places where weather isn’t convenient for constant solar generation, have a way to enjoy its sustainability benefits.

According to Bolton, purchasing RECs is fine, but “there is a view in the world of sustainability that favors larger actions such as engaging in a contractual structure allowing projects to be built.”

He adds that engaging a utility-scale wind or solar product that allows corporate purchase is a way to tap into green energy by, essentially, purchasing into ongoing green energy products so that they can continue to expand.

RECs are something that Constellation Energy Corp., based in Baltimore, helps its clients weigh as a means of boosting green credentials as part of a strongly analytical approach to energy generation and sustainability.

“We look at analytics as the foundation, the first step in a process,” affirms Raj Bazaj, Constellation’s VP, solution sales. The company provides customized solutions that can include everything short of on-site solar arrays, notes Bazaj, if Constellation suggests alternatives to self-energy generation.

He believes that the REC alternative can be a sensible recourse, but, as an offset, it doesn’t save the holder money nor make an operation more efficient. Rather, it comes at a rising cost, as it’s an in-demand market-based instrument. However, it does provide a way for a grocer to let customers know that the operation is doing something to offset the environmental and social costs of its power generation. A less expensive alternative is an Emissions Free Energy Certificate (EFEC), Bazaj notes. EFECs cover some of the same energy sources as RECs, such as wind and tidal, but their sources don’t have to be renewable and include nuclear generation.

EDP Renewables North America (EDPR), based in Houston, has been involved with about 65 solar energy projects with Bentonville, Ark.-based Walmart and has worked with Hannaford as well.

Louis Langlois, associate director, investments, EDPR NA Distributed Generation, cautions that chain operators should be thinking about a “portfolio approach” to solar generation. Not every store in a chain operation may see cost advantages with a solar array, even long term, because of initial and operational costs and because conditions affecting locations differ, with regulation and incentives more variable even than weather. That being the case, an investment over many stores can pay off better than that at a single store.