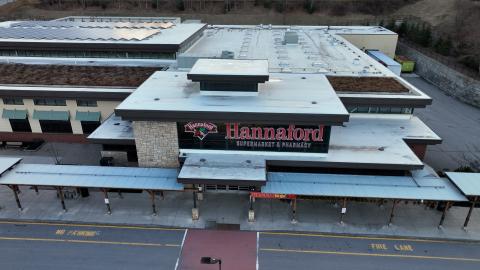 Supermarkets have traditionally been energy intensive due to simultaneous needs of heating and cooling, but Hannaford is working to dispel that image by reducing its energy consumption. Since the beginning of the decade,it has converted 86.4 megawatts of its remaining electricity usage to solar — enough electricity to power 16,000 typical homes for a year, according to the grocer. The Northeast retailer currently has rooftop solar panels on 10 of its stores. Other implemented energy efficiency projects include LED lights, night shades, doors on cases, and state-of-the-art refrigeration systems.

Hannaford intends to couple its efforts of upgrades and conversions with integrating community and large-scale solar projects in Maine and New York to propel its stores to the 100%-green milestone by 2024.

“Hannaford has always been serious about sustainability — and over time, it’s become an integral business function. But there is a sense of urgency as we witness the planet in the midst of a climate crisis,” said George Parmenter, who leads sustainability efforts for the company. “Hannaford wants to lead where we can make the most impact — and renewable energy is just another step in our journey.”

“Doing what’s right for our business includes doing what’s right for our associates, community and our planet. Powering Hannaford with 100% renewable energy sources will make an immediate, positive impact on greenhouse-gas emissions,” added Mike Vail, president of Hannaford. “This is an important leap forward in our sustainability journey — and one that we hope sparks others to join. Prioritizing the health of our communities and the planet is a win for us all.”

According to a recent report by the United Nations on climate change, “[H]armful carbon emissions have never been higher in human history … [and] scientists are urging ‘now or never’ to limit global warming.” Report findings indicate that achieving net-zero carbon dioxide emissions globally by the early 2050s is the way to stabilize global temperatures and carbon dioxide emissions.

Hannaford, an Ahold Delhaize USA brand, has committed to be a net-zero carbon business by 2040.

“Hannaford is light years ahead of the rest of the industry when it comes to their sustainability efforts — and they’ve been doing so for well over a decade,” said Peter Cooke, co-founder of Santa Cruz, Calif.-basedRatio Institute, an independent, nonprofit organization dedicated to accelerating measurable sustainability and viability in food retail. “Hannaford associates continue to rally behind making the company more sustainable, and that is an advantage to their current and future success in making the planet healthier and greener.”

Cooke has worked with more than 1,000 grocery stores and 15 grocery chains as part of his grocery stewardship work.

Hannaford points to its prior milestones as evidence of its ability to achieve 100% renewable energy by 2024. These past successes in sustainability include: