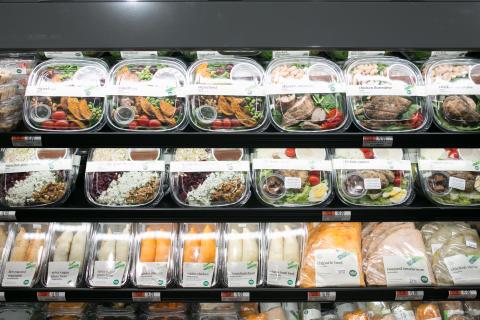 The latest Whole Foods Market location in New York City features a mix of local and national brands, as well as prepared meals.

A new Whole Foods Market location opened June 1 in New York City’s NoMad (short for North of Madison Square Park) neighborhood and boasts more than 1,000 local products on its shelves. The store, at 63 Madison Ave., is more than 54,000 square feet and features nods to the nearby Flatiron Building and Madison Square Park.

A full-service coffee bar will be operated by New York mainstay Cafe Grumpy and other dining options will include a quick-service Mediterranean venue called Za’atar and Nomad 63 by Whole Foods Market, which is a bar offering beer, wine and small bites such as fish and chips and vegan cauliflower nachos.

Produce offerings are sourced from 20 local farms, including salads from Gotham Greens and microgreens from Upward Farms. A specialty department features local cheesemakers and artisan producers, while a full-service meat counter has butchers available to cut steaks to order or debone poultry.

Also available is a selection of more than 180 craft beers and a bakery with standard favorites, as well as a wide variety of special diet items and vegan baked goods. Prepared meals can be purchased in an area meant to feel like a food hall.

Whole Foods is making itself at home in the NoMad neighborhood, and plans to donate $9,000 and fresh food to Rethink Food, whose mission is to create a more sustainable and equitable food system by rethinking the way food is produced and distributed. The company will also sponsor the Madison Square Park Conservancy’s Pollinator Picnic and support the Flatiron/23rd Street Partnership Business Improvement District’s public art and fitness programming with a $15,000 donation.

The first certified-organic national grocer, Austin, Texas-based Whole Foods has more than 500 stores in the United States, Canada and the United Kingdom. The company is a wholly owned subsidiary of Amazon. Seattle-based Amazon is No. 2 on The PG 100,  Progressive Grocer’s 2022 list of the top food and consumables retailers in North America.