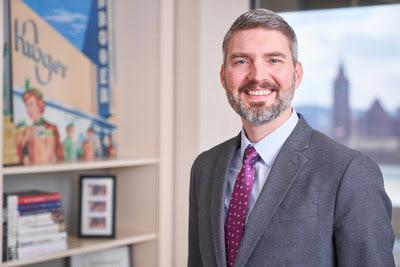 The Kroger Co. has elevated a key architect of its Zero Hunger | Zero Waste program to a new position.

"As a key architect of Zero Hunger | Zero Waste, Keith's strategic and inclusive leadership has advanced Kroger's position as a national thought leader and authentic advocate for ending hunger, eliminating waste, and other social impact initiatives," said Rodney McMullen, Kroger's chairman and CEO. "He combines broad public affairs experience with knowledge of Kroger's corporate character and belief that business can be a force for good."

Dailey, 39, has nearly 20 years of public affairs experience, including a decade in electoral politics and government.

Dailey serves on the boards of the Center for Food Integrity and Cincinnati Regional Business Committee. He earned a dual bachelor's degree in Philosophy and Politics and Government from Ohio Wesleyan University.

Dailey succeeds Jessica Adelman, who joined Kroger in 2015 and recently left the company to pursue other opportunities.

Cincinnati-based Kroger employs nearly half a million associates who serve 9 million-plus customers daily through a seamless digital shopping experience and 2,769 retail food stores under a variety of banner names. The company is No. 2 on Progressive Grocer’s 2019 Super 50 list of the top grocers in the United States. Amazon is No.10 on PG's list.