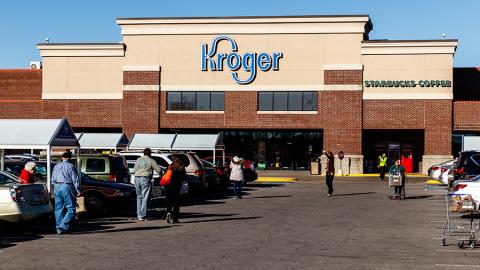 The Kroger Co. has donated more than 1 billion meals over three years as part of the food retailer’s Zero Hunger | Zero Waste program, and plans to reach 3 billion meals by 2025, the company said Wednesday.

Kroger describes the program, which launched in 2018, as “a social impact plan aimed at creating communities free of hunger and waste,” and its release of the metrics achieved gives a picture of those efforts, which have also included more than $8 million toward COVID-19 relief efforts.

In all, the Kroger program has resulted in “$279 million in charitable giving to its communities in 2019, including $205 million to organizations that are helping to end hunger,” the food retailer said. “Kroger provided a total of 493 million meals—in food and funds—to its communities across the country, a 56% increase from 2018.” In addition, the food retailer said it has donated “101 million pounds of safe, surplus food from its retail stores, distribution centers and manufacturing plants to Feeding America food banks.”

Donations of food and money are not the only part of this Kroger push. The food retailer seeks to reduce waste —— among other things, that reflects desires among younger consumers for what’s often called sustainable commerce. On Wednesday, Kroger said that via the program, it has “accomplished 80% waste diversion, redirecting 2.3 million tons from landfills across its 35-state and Washington, D.C. footprint.” That’s not all. Kroger said its food tonnage waste that has been recycled increased 28% year over year, with total recycling up 12%. As well, the food retailer said Wednesday that it has “achieved Zero Waste operations in 33 of 35 food manufacturing plants.

"Zero Hunger | Zero Waste addresses the disparity between hunger and food waste in America, a mission that has never been more relevant," said Rodney McMullen, Kroger's chairman and CEO. "We are pleased with our progress so far, but also recognize the monumental task still at hand. Kroger is determined to do even more to help our neighbors and communities secure a healthier, brighter future."