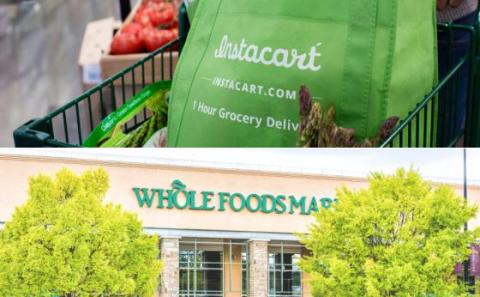 Instacart and Whole Foods are "winding down" their relationship after what has been a four-year partnership, immediately beginning the first phase of a transition that will affect hundreds of jobs.

In a blog entry, Apoorva Mehta, CEO of the San Francisco-based grocery technology company, announced that his company will begin scaling back its in-store shopper operations at Whole Foods stores, totalling 1,415 associates across 76 locations. Some 243 will be impacted starting Feb. 10, 2019, and in the months that follow, Instacart expects to ramp down all remaining Whole Foods in-store shopping operations to prepare for the Austin, Texas-based grocer's exit from the Instacart marketplace.

The vast majority of Instacart shoppers work across multiple retail partners rather than a single grocer, and these shoppers who also shop Whole Foods will not be impacted. For Whole Foods specifically, the multi-store shoppers will still be able to pick, pack and deliver from Whole Foods stores nationwide until the exit.

But for the shoppers who shop Whole Foods stores exclusively, Instacart plans to place more than three-quarters of these impacted shoppers at new in-store shopper jobs with other local retailers, also offering a transfer bonus to support their transition. The company notes that it is "committed to do everything" it can to support those remaining affected shoppers.

"Second, we’re committed to taking care of all impacted in-store Whole Foods shoppers who choose not to, or cannot, be placed in a new role," Mehta said. "For those shoppers, we’ll be providing a minimum of three-months separation package based on your maximum monthly pay in 2018, as well as additional tenure-based compensation. We’ve already shared this news directly with all impacted in-store Whole Foods shoppers but if anyone has any questions on today’s news, please reach out to your manager for more information."

Late last month, Instacart made news by slashing prices on grocery delivery by a third, making the service a more competitive and cost-feasible option than Amazon, which delivers groceries from Whole Foods through its Prime Now service, and rival grocery ecommerce service Shipt. The move came months after Amazon raised its own Prime membership fees, and actually made delivery from Amazon's own Whole Foods stores more cost-feasible through Instacart than through the Seattle-based ecommerce giant's own Prime Now service.

Instacart picks, packs and delivers from 15,000 stores across more than 4,000 cities in the United States and Canada. The company partners with more than 300 retailers, and has nearly 800 employees and a community of 70,000-plus personal shoppers. It recently announced $871 million in new funding, led by D1 Capital Partners, Tiger Global, Coatue Management and Valiant Capital, that raised the company’s valuation to $7.9 billion.

Whole Foods Market operates more than 470 stores throughout the United States, Canada and the United Kingdom. Under the name of its parent company, Amazon, the grocer is No. 8 on Progressive Grocer's 2018 Super 50 list of the top grocers in the U.S.