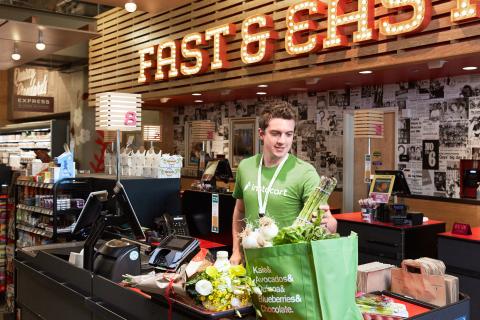 Instacart's order volumes have surged as much as 500% over the past few months, the company says.

The rocket ship known as Instacart just got another infusion of fuel.

The San Francisco-based company has secured $225 million in new funding to scale its operations as it races to keep up with unprecedented shopper demand for online grocery. The new cash infusion comes at a pivotal time for the company and for the online grocery space. More and more shoppers are buying groceries online due to the pandemic. Instacart has benefited from that over the past few months. Meanwhile, many of Instacart's competitors, from startups to big retailers, are still racing to prioritize online capabilities and contactless shopping to meet new consumer demand.

Instacart’s share of grocery pickup and delivery sales jumped to 55% in the third week of May, up from about 30% in February, according to research firm Second Measure. According to Instacart, its order volumes have surged as much as 500% over the past few months as shoppers have migrated to shopping for groceries online during the pandemic.

"COVID-19 created a massive shift for the grocery industry and forever changed how people view the necessity of on-demand services. Overnight, Instacart became an essential service for millions of families across North America, and our teams have worked incredibly hard to safely serve customers and shoppers during this time of need. We have ambitious plans for the future, and this new investment enables us to deepen our support for our shoppers and partners, further fund strategic initiatives such as our advertising and enterprise businesses, and continue to deliver exceptional experiences for customers. This pandemic has fundamentally reshaped the way people think about grocery and e-commerce, and we're proud to have Instacart continue to play an important role in people's lives now and long after this crisis subsides," said Apoorva Mehta, founder and CEO of Instacart.

The $225 million is part of a new financing round led by DST Global and General Catalyst, with existing investor D1 Capital Partners participating. This new round brings the company's valuation to $13.7 billion; it was valued at $7.87 billion in its last funding round in November 2018, when it raised $871 million. The company now has nearly $1 billion in cash on its balance sheet.

Instacart said that it expects to deploy the new capital in a number of ways, among them continuing to support its growing shopper community with new services and features; further investing in key businesses such as Instacart Advertising and Instacart Enterprise; and further scaling its operational and technical teams to help meet the increased customer demand for grocery delivery and pickup.

Instacart, which has hired about 300,000 new workers since March, is now accessible to more than 85% of households in the United States, across all 50 states, and more than 70% of households in Canada. The company has accelerated its launch cadence with retailers since the start of the year and now partners with more than 400 national, regional and local retailers across more than 30,000 stores in the Untied States and Canada.

"That Instacart was able to meet an unprecedented increase in consumer need over the past several challenging months is just one of many signals of the company's operational excellence. We've been following this team since the beginning and, today, we're proud to partner with Instacart as they continue to build the service – with its ease of use, selection and affordability – to make online grocery accessible for millions of people across North America," said Kyle Doherty, managing director of the General Catalyst Endurance fund.

In addition to groceries and everyday goods, Instacart has  expanded its offering over the past year to include alcohol and prescription delivery and pickup services.

This week, the company announced that it has teamed with Columbus, Ohio-based Big Lots to deliver not just groceries and other consumables, but also furniture.

"Instacart's response to COVID-19 – refocusing the company to meet the rapid shift in needs of customers, shoppers and retailers – has strengthened our conviction in its capacity to lead this important industry in partnership with brick-and-mortar retailers. We continue to believe that consumer adoption of online grocery will grow substantially in the coming years and are proud to deepen our investment in Instacart at this time," said Dan Sundheim, founder of D1 Capital Partners.