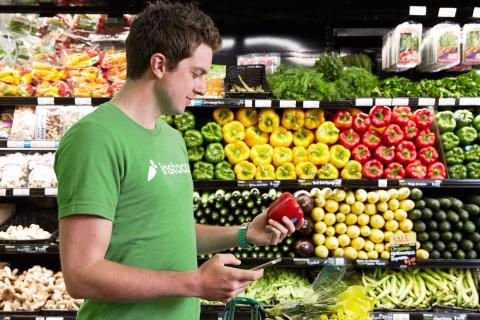 The study appears to indicate that Instacart generates a halo effect that drives not just ecommerce traffic, but also brick-and-mortar traffic

Instacart’s role in the grocery industry is driving significant increases in retail grocery employment and revenue, according to a new study.

According to the study, the entry and expansion of Instacart into local markets acts as an economic complement to grocery store employment, bringing incremental business to the store while creating an ecommerce footprint for retailers. Instacart would not confirm whether they paid for the study.

“The data indicate that in 2019, the 'Instacart Effect' was responsible for an increase of more than $620 million in revenue and over 23,000 jobs in the grocery sector in California, New York, Illinois and Washington," Kulick said. "These findings demonstrate that Instacart has played an important role in helping the grocery industry compete in a challenging economic environment.

“It is often assumed that disruptive innovations necessarily displace traditional modes of commerce and employment," he added. "However, with Instacart, the opposite is true. While Instacart is changing the way customers interact with grocery stores, it is an example of how innovation can benefit industries and their workers.”

The study appears to indicate that Instacart generates a halo effect that drives not just ecommerce traffic, but also brick-and-mortar traffic. The findings of the firm's value come as gig economy companies face criticism and new regulations that threaten Instacart's business model.

The study provides evidence demonstrating that the "Instacart Effect” is causal. In comparison to retailers such as bookstores, sporting goods stores and clothing stores, Instacart showed no effect on growth for any nongrocery retail industries.

“Today in the U.S., grocery is almost a $1 trillion industry — but it’s only now going through its first big wave of tech innovation. Change in a business sector often comes at the detriment of incumbents, and we’ve seen this play out again and again across industries. But it doesn’t have to be that way. Since day one, our goal at Instacart has been to lift up our brick-and-mortar grocery partners and give retailers of all sizes an edge in an increasingly competitive industry,” said Instacart President Nilam Ganenthiran. “While we’ve long seen in our own internal data that Instacart can incrementally boost retail partner sales between 50% to 80%, this study shows that when Instacart enters a market, the tides turn and the 'Instacart Effect' drives meaningful job creation and increased revenue for the grocery industry.”