Today’s on-demand economy has created a heated race between tech behemoth Amazon and traditional brick-and-mortar retail chains making a concerted effort to increase online sales and combine the best of online and offline worlds. Amazon made a variety of acquisitions last year, most notably its $13.7 billion Whole Foods Market deal, which jolted both brick-and-mortar grocers and online meal-kit companies alike.

Although Whole Foods’ previous digital presence was fairly minimal, it’s likely to undergo massive growth due to Amazon’s newfound access to the Austin, Texas-based grocer’s network of existing physical retail locations and its loyal customer base. At the same time, Amazon can access the groceries found within Whole Foods, and capitalize on Amazon’s significant presence online, to sell them to old or new customers better and optimize the user experience for busy people who don't have the time or convenience to sample food or drinks within the physical stores.

But with Instacart’s momentum putting egrocer platforms in the spotlight, the question arises: does this help existing retailers compete with Amazon? 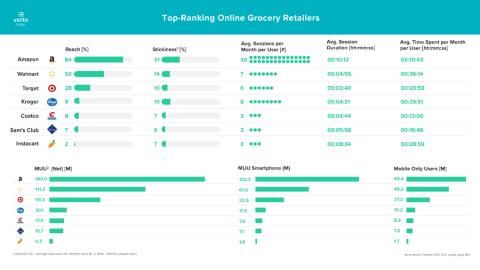 According to recent Verto Analytics data on the biggest online grocery retailers, Amazon outranked Walmart, Target, Kroger, Costco, Sam’s Club and Instacart in stickiness (Verto’s way of measuring engagement by comparing daily users with monthly users), in addition to average time spent per month and reach. While Safeway is the supermarket chain with the largest monthly online user base, ranking 84th in Verto’s list of top 500 properties, it brings in just 7.3 million monthly unique users. The chain lags behind retailers like Costco, with 17 million unique monthly users, and Target (ranking fifth overall), with 59 million.

And although Instacart reported just 4.3 million monthly unique users in October, the grocery-delivery service has been busy following the Amazon/Whole Foods announcement, establishing a new partnership with Kroger and deepening its existing one with Costco, along with a variety of other online grocery retailers. While this may seem like a tough time for any new contenders to break into the online grocery space, Instacart’s recent partnerships with Albertsons and QFC show that the startup has no plans to slow down its efforts to scale to Amazon-like levels.

Of course, if we zoom out to view the overall ecommerce industry, Verto data clearly illustrate that Amazon is leading much more than just the egrocery market. In fact, this year’s 10 most popular ecommerce properties (which include websites and apps) show little change from last year’s rankings, with Amazon at the top. 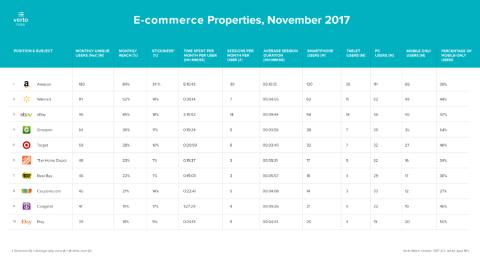 Amazon continues to dominate the field across all metrics, with more than 180 million unique monthly users who spend an average of more than five hours per month on Amazon spread across 30 monthly sessions – a sign that some consumers may use Amazon on a daily (or near-daily) basis.

When it comes to overlap in usage, 94 percent of shoppers at Walmart, Amazon’s main rival, also shopped on Amazon in October 2017, yet only 58 percent of Amazon shoppers visited a Walmart property in the same month. 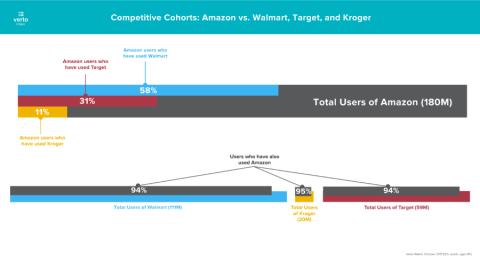 The numbers are even more intriguing for smaller ecommerce properties: Kroger saw 95 percent of its customers also shop on Amazon during October. Only 11 percent of Amazon shoppers also shopped at a Kroger property during the same month, showing slight growth year-over-year, when only 9 percent of Amazon's total consumer base also shopped on Kroger’s online properties within the same month. Given Kroger’s recent partnership with Instacart, this could very well see another uptick in the new year.

Whether it’s meal kits, ordering one-off meals or grocery delivery, the on-demand economy as it relates to food will experience significant growth opportunities in 2018. While Amazon has quickly set itself up as the established leader in online retail, competitors will likely band together to offer alternative and comparable offerings for consumers. As the grocery market evolves, expect to see an increase in egrocer startup partnerships with traditional grocery stores – with the possibility of another large acquisition – for quicker and more convenient delivery options, in hopes of catching up, and maybe even surpassing, Amazon.

Amazon’s biggest issue stemming from the Whole Foods acquisition is extending its presence vertically, which makes it less attractive as a platform for traditional groceries. Instacart remains a more independent, platform-type solution, and its offerings can enhance grocery stores’ own websites, apps, or provide access for consumers to buy something from the local grocery store, via Instacart properties. This is a win-win for both parties. Using Amazon as a platform is less attractive, as Amazon wants to profit from its acquisition. What remains to be seen during 2018 is whether there are more major M&A deals taking place via the increased convergence of physical and online retailing/shopping, and whether any of the recent moves and fresh interest within the competitive landscape, will shape Amazon’s fortune.