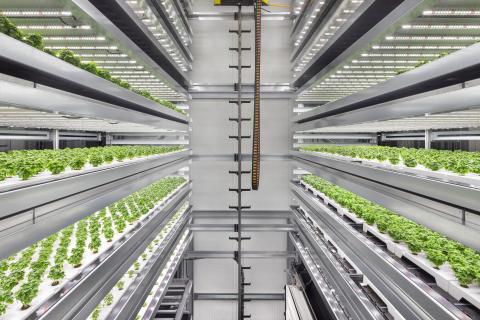 Infarm's new growing center, near Baltimore, is another step in its U.S. expansion roadmap, according to which it plans to roll out a network of cloud-connected farming facilities from coast to coast. (Credit: Infarm/die photodesigner.de)

Global vertical-farming company Infarm will drive its U.S. expansion by establishing its third growing center, which is set to be company’s largest facility to date, near Baltimore.

In addition to Infarm’s existing vertical farming facility in Seattle and one planned for Austin, Texas, the new Northeast Growing Center will be located in Columbia, Md., in the state’s Howard County. The opening of the new growing center is another step in the company’s U.S. expansion roadmap, according to which Infarm plans to roll out a network of cloud-connected farming facilities from coast to coast.

“With the opening of this new growing center, we are now entering a region where vertical farming is already widely adopted and green innovations are thriving,” said Erez Galonska, CEO and co-founder of Berlin-based Infarm. “Once fully operational, our growing center will provide the Northeastern U.S. with a new food production capability that minimizes climate and supply chain risk by growing more than 75 types of plants locally, sustainably and reliably 24/7, 365 days a year.”

Infarm is committed to using 100% green-certified energy throughout its network by the end of 2022 and will operate the Northeast Growing Center with green-certified energy. The company’s growing centers are set up with modular cloud-connected farming units, each occupying 430 square feet of ground space and 33 feet in height, and producing more than 500,000 plants per year while saving 95% of ground space and 95% of water.

The new Maryland facility will add around 200,000 square feet to Infarm’s U.S. portfolio, produce up to 45 million crops per year, and provide more than 50 jobs in Howard County.

“We’re thrilled that Infarm has chosen Howard County for this expansion of its innovative, data-driven vertical farming operation,” said Maryland Gov. Larry Hogan. “Maryland’s strategic location makes it an ideal site for the new growing center and will allow the company to bring its nutritious produce to millions of new customers on the East Coast. We are proud to welcome Infarm to Maryland’s business community and applaud its commitment to unique and sustainable farming methods.”

The company’s data-driven approach and constant measuring and analyzing of plant data have improved its crops’ yield, taste and production costs. Infarm has collected approximately 100 billion data points to date and offers more than 75 products, including herbs, leafy greens, ready-to-eat salads, microgreens and mushrooms, along with an additional 40 products such as strawberries, peppers, cherry tomatoes and peas being added later this year.

More than 50% of the new growing center is already pre-ordered, with the first harvest planned for spring 2023. The remaining capacity will be added by early 2024. By 2030, Infarm plans to be established in 20 countries.

Other vertical-farming companies, among them Bowery Farming, Fifth Season and Square Roots, are also in growth mode in the United States, with new facilities, crops and retail products rolling out.