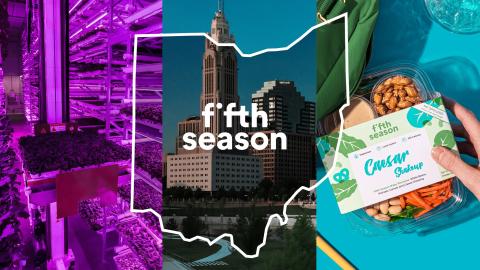 Fifth Season is a sustainable food systems pioneer creating a new fresh food ecosystem and category of ready-to-eat salads. The company's salads feature tender lettuces, spinach and baby romaine, all of which are grown by a proprietary farming platform that's automated from end to end via a system of integrated software and robots.

The new automated farm in Columbus will begin operations in 2023 and measure  180,000 square feet — approximately three times the size of the flagship Braddock farm in Pennsylvania.

"Thanks to our modular design, no software work is needed to integrate bots into the new facility; they just start working together in their new configuration," said Brac Webb, CTO at Pittsburgh-based Fifth Season. "At the Braddock farm, we have just over 100 instances of our bots in use, and at the future Columbus farm, we plan to have around 250 instances." The Columbus farm will also prioritize renewable solar energy and leverage an onsite microgrid.

Along with the physical expansion of the farming operation comes an expansion of Fifth Season's team – the company is expected to grow to more than 100 full-time employees by early 2023.

To start, Fifth Season has hired three new leaders, including CFO Brian Griffiths, a financial and tech veteran with experience in the corporate, investment banking and public accounting sectors. "From my 30 years of experience in technology, it was immediately clear to me that Fifth Season is in a league of its own," said Griffiths. "We're positioned to continue being the most capital-efficient company in our sector and rapidly scale our business."

Fifth Season also added two longtime pioneers in the food industry, SVP of Sales Glenn Wells and VP of Food Products Varun Khanna, who will leverage their combined experience of more than 45 years to advance the business. Prior to joining Fifth Season, Wells was a leader at iconic brands like Quaker Oats, Welch's and Dole. Meanwhile, Khanna was the innovation leader at Chobani and Sabra. Speaking of Sabra, the hummus producer recently collaborated with Fifth Season onnew salad kits featuring sustainably farmed greens paired with creamy, plant-based hummus, guacamole and whole grains.

This latest investment in new hires will allow Fifth Season to manage its 600% projected sales growth of ready-to-eat salads in 2022, which will be fulfilled by the farm in Braddock.