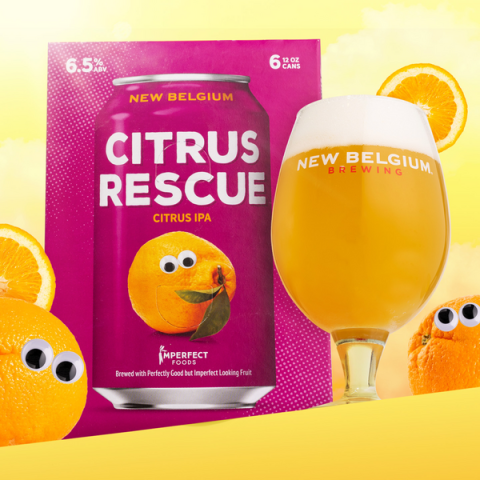 Certified B Corporations Imperfect Foods and New Belgium Brewing have partnered to make a first-of-its-kind beer to not only educate beer drinkers about the state of the broken food system, but also to change the perception of the aesthetics of food and encourage more people to take steps to reduce food waste in their own lives. The result of this collaboration is Citrus Rescue IPA – a fruited IPA brewed using oranges that may not be “perfect” by society's standards due to little scars and blemishes, but are just as healthy and delicious.

In 2019, 35% of all food in the United States went unsold or uneaten, according to nonprofit ReFED. That’s $408 billion worth of food – roughly 2% of U.S. GDP – with a greenhouse-gas footprint equivalent to 4% of total U.S. greenhouse-gas emissions.

Online grocer Imperfect Foods is on a mission to eliminate food waste by building a better food system, working directly with farmers and producers to rescue, redistribute and develop goods across multiple grocery categories. Meanwhile, the brewing company New Belgium has prioritized waste reduction practices for more than 30 years and has received platinum certification from the U.S. Zero Waste Business Council for its achievements in diverting waste from landfills. The new partnership underscores both brands' commitment to helping solve major social, economic and environmental issues.

"For our first national retail beverage partnership, we're thrilled to be working with fellow B Corp New Belgium Brewing to shine a light on food waste with this delicious and waste-fighting beer. This Citrus Rescue IPA is made using cosmetically imperfect, oranges. We hope this collaboration encourages people to think differently about how their food looks and to engage in conversations around food waste over a cold beer," said Maddy Rotman, head of sustainability for San Francisco-based Imperfect Foods.

"Citrus Rescue IPA is a delicious way for beer drinkers to start reducing the food – and beer – wasted in their own homes, and we hope it inspires beer drinkers to seek out and support certified B Corps like Imperfect Foods and New Belgium, which make the well-being of people and our planet a business imperative equal to financial success," added Astrid Moresco, brand manager at Fort Collins, Colo.-based New Belgium.

The two companies also collaborated on a set of digital resources for customers who want to adopt food-rescue practices at home, including several tips for beer drinkers who want to learn how to extend the life of their favorite beverage and keep it tasting fresh.

Founded in 2015, Imperfect Foods achieved its Certified B Corp status in November 2021. To date, the company has rescued more than 150 million pounds of food from lesser outcomes.