You can’t help being inspired by a visit to the International Dairy Deli Bakery Association’s annual expo.

IDDBA President/CEO Mike Eardley and his team continue to enhance the educational offerings and best-practices examples on display at their yearly festival of fresh retailing. This year’s event, June 10-12 in New Orleans, hit new highs – among them, attendee numbers approaching 11,000 and, according to Eardley, the “most retailers ever” in attendance.

But more importantly, there’s the opportunity to learn, beyond the topnotch exhibitors and a gut-busting array of new, on-trend products being sampled (many of which you can check out on my Twitter feed).

“If you can’t learn, just coming to a trade show is not going to do it,” Eardley remarked during a meeting with trade media. “We need to take on a 360-degree view of helping each other succeed.”

A huge part of that is Show & Sell, a longtime expo feature that this year broke free of its walls at the back of the expo and took center stage. Smack in the middle of the exhibit hall so all attendees had to pass through it, Show & Sell offered exciting, innovative best merchandising practices for deli, bakery, prepared foods, meal kits, grab-and-go items – on every shelf a solution for a consumer need-state. Meanwhile, the Show & Sell stage hosted talks by keynoters who expanded on their general session presentations and other experts offering additional compelling content.

To be sure, the human element is getting renewed attention. In his own keynote address, Eardley called our three areas of attention for the organization that are of utmost importance to the industry: technology, particularly blockchain and its role in transparency; superconsumers, and their power to drive sales across key categories through strategic need-state merchandising; and, perhaps most important of all, people, or talent development.

“There is no more important issue than getting the right people involved in our industry,” Eardley asserted, quoting Progressive Grocer’s 2018 Annual Report of the Grocery Industry in which retailers declared labor to be the issue most keeping them up at night. “The ability to engage and attract talent is critical to keeping our industry from becoming irrelevant.”

To that end, Eardley called out IDDBA’s Fresh Careers program that sponsored attendance at this year’s expo for 16 students from four universities aiming for careers in food retailing, each of whom shadowed industry veterans at the show. Additionally, IDDBA continues to offer scholarship programs for industry-minded students.

“We’re dedicated to finding passionate talent for our industry,” Eardley said. “It’s the only way to grow the future.” 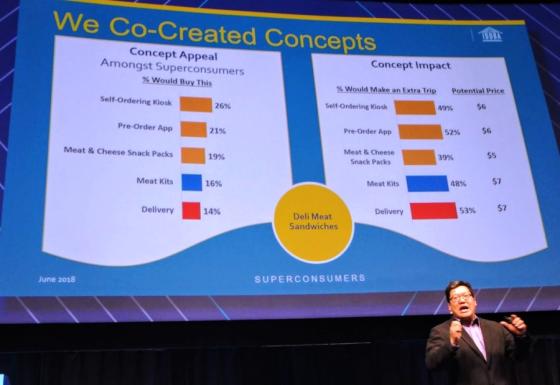 The importance of people was a common thread through most of the expo sessions.

Ginger Hardage, former SVP of culture and communications for Southwest Airlines, noted that “the true character of a brand starts with the people.” Albertsons President/COO Jim Donald urged retailers to “build a foundation of people that can push your business to the top.” SAP CEO Bill McDermott reminded attendees that “trust is the ultimate human currency – it’s earned in drops and you can lose it in buckets if you don’t make it a priority.”

Understanding people and how to better meet their needs is an emerging opportunity, noted speaker Eddie Yoon, recognized expert on superconsumers, whose ongoing work with IDDBA has identified new key consumer groups that could mean $5 billion in incremental sales to grocers in the coming years: parents with children in team sports, looking for easier ways to feed large groups; people who work nights and weekends, looking for better access to good food choices; and coffee lovers that grocers could woo away from costlier coffee shop experiences with the right strategy.

Of course, the expo floor held products galore (examples on my Twitter feed), the leading trends on display being snacking, convenience (for consumer and back of house), grab and go, flexibility (meal kit-ability?), proteins of all sorts, wellness as well as decadence – in all, solutions for pretty much every need.

It’s up to progressive grocers to pick them up and run with them.