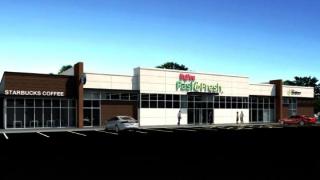 The Hy-Vee Fast & Fresh store in Davenport, Iowa, which opened in December 2018

In addition to the new store in Altoona, Iowa, Hy-Vee is planning to open two more locations "soon," the news outlet stated. One will be in West Des Moines, south of the freestanding Hy-Vee HealthMarket that opened last summer in the Jordan Creek Town Center, and the other in Des Moines.

The fresh-focused, smaller-format concept provides shoppers with mainstays found in a typical convenience store, including fuel pumps, roller-grill favorites, frozen food and wine and spirits. If anything like the location in Davenport, it is roughly one-tenth the size of Hy-Vee's largest grocery store, in Bloomington, Ill. And shoppers even can make their purchases in the store or through Hy-Vee's Aisles Online click-and-collect service.

At the new location, shoppers also can enjoy an "abundance of prepared meals, [and] a build-your-own-pizza bar," the Register said. It is intended to help on-the-go shoppers seeking to grab a "quick pizza" or "throw a family meal in the oven" on a day when the family needs to eat but a complete grocery-shopping trip cannot be made.

News outlets first reported that Hy-Vee was working on the new format in the spring of 2017. Initial reports said that the first location was being planned for the grocer's hometown and that it might also include a quick-serve restaurant.

Hy-Vee Inc. operates more than 245 retail stores across eight Midwestern states and has more than 80,000 associates. It ranks 15th on Progressive Grocer’s 2018 Super 50 list of the top grocers in the United States.