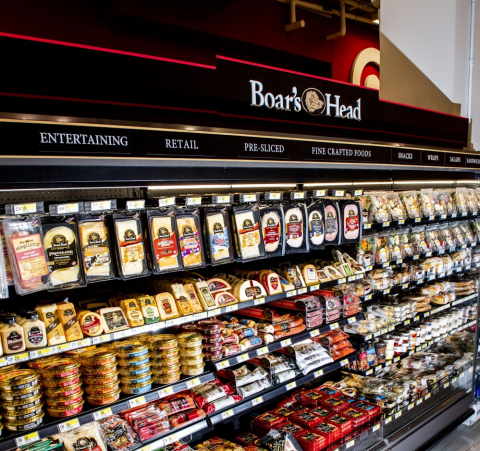 Target is the first big-box retail partner for Boar's Head

Just a few hours before its annual investors' meeting, Target gave a big hint about what it plans to tell shareholders: We are making aggressive moves to win every part of the store, and that includes grocery.

On Monday, Target revealed a new program that shows just how much of a priority it is for the Minneapolis-based retailer to grab a larger share of the grocery market.

The retailer said that it has inked a new deal with Sarasota, Fla.-based Boar’s Head, making Target the first mass retailer to partner with the brand on a grab-and-go deli offering in select stores. The new offering will feature a variety of Boar’s Head sandwiches, salads and snacks, as well as prepackaged premium deli meats and specialty cheeses for entertaining, priced $2.99-$8.99.

The latest move by Target to ramp up its grocery business is particularly significant because the prepackaged deli meat category has been a trend in mainstream grocery. But the Boar's Head brand gives Target added gravitas in the fresh perimeter.

“Our partnership with Boar’s Head is yet another example of how we’re serving up the very best national brands our guests love while also differentiating with incredible, only-at-Target brands — all at a great value," said Stephanie Lundquist, EVP and president of food and beverage at Target. "We’re excited to work with Boar’s Head to give our guests even more delicious options to fit their busy lifestyles — and even more reasons to choose Target.”

According to Target, it began testing Boar’s Head grab-and-go areas last November, and they’re currently available in six stores across New York City. Customer response to the early rollout has been incredibly positive, and Target plans to expand Boar’s Head grab-and-go options to up to 200 additional stores by the end of the year.

Meanwhile, Target's investors' meeting, which is usually held in New York City every year, will be broadcast from Minneapolis instead, due to concerns over the spread of coronavirus, the company said.

Target revealed in 2017 that it would invest more than $7 billion in capital over the next three years to grow sales faster, gain market share, adapt to guests’ rapidly changing preferences and give them even more reasons to choose Target.

Target operates more than 1,800 stores, 39 distribution centers and Target.com. The company is No. 15 on Progressive Grocer’s 2019 Super 50 list of the top grocers in the United States.