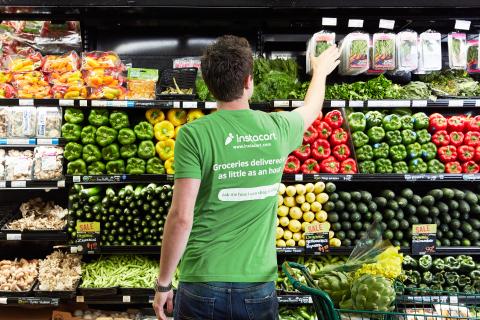 According to Edison Trends, the top five grocery brands in terms of Instacart orders over the last 24 months were Publix, Whole Foods Market, Kroger, H-E-B and Costco

A visit to a Publix store is bound to reveal a legion of Instacart shoppers roaming the aisles – and now we know why.

According to new research from Edison Trends, a San Jose, Calif.-based ecommerce intelligence company, Publix is Instacart’s top-selling online grocer. In fact, despite losing Amazon-owned Whole Foods Market as a grocery delivery partner in May, Instacart has more than made up for the loss by adding new business from grocers such as Publix Super Markets Inc. and Wegmans Food Markets Inc. as grocery delivery continues to grow more popular among shoppers. Indeed, it seems as though Instacart has become an addiction not just for shoppers, but also for the majority of grocers in the United States.

Instacart’s legion of shoppers now roam the aisles of more than 300 grocers and food retailers in the U.S., around 100 more than last year. The grocery delivery (and pickup) service now covers 80% of U.S. households, up from 35% in 2017. According to Edison Trends, Instacart leads the nation in grocery delivery market share with 59% of share. Shipt, Amazon and FreshDirect all lag Instacart when it comes to grocery delivery market share. All of this growth has led the company to a valuation of around $7.8 billion after it raised $871 million during a round of financing last year.

Meanwhile, online grocery sales overall have grown 15% in 2019, according to an analysis from Barrington, Ill.-based consultancy Brick Meets Click.

According to Edison Trends, the top five grocery brands in terms of Instacart orders over the last 24 months were Publix, Whole Foods, Kroger, H-E-B, and Costco. Publix took the lead in May 2018; this past September, the Lakeland, Fla.-based grocery chain had 69% more Instacart orders than its next-closest competitor, Issaquah, Wash.-based Costco.

Other key takeaways from the research:

Further, the grocery delivery company has set its sights on what it thinks is the next area of grocery growth: alcohol delivery. Instacart has expanded alcohol delivery to 14 states and Washington, D.C., from nearly 100 different retailers.

"Part of grocery shopping for many people goes beyond getting fresh produce, meats and pantry staples, and includes picking up the perfect bottle of wine for a dinner party, or their favorite beer to sip while watching the big game," Nilam Ganenthiran, chief business officer at San Francisco-based Instacart, said earlier this year. "By working alongside our retail partners to add alcohol to the marketplace, we're offering customers more choice and making it easier for Instacart to be their 'one-stop-shop' to get the groceries they need -- including beer, wine and spirits -- from the retailers they love."

In the past few months Instacart has hired a former Amazon executive, Seth Dallaire, to be its chief revenue officer. And other ecommerce delivery providers, such as Postmates and DoorDash, have disclosed plans to encroach on Instacart's turf by offering grocery delivery.