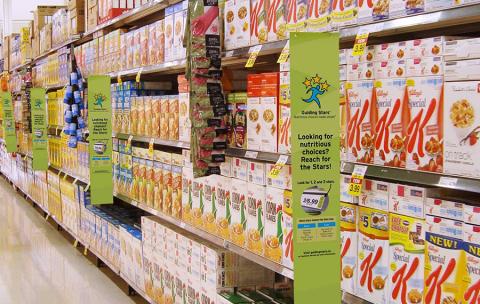 The Guiding Stars system in a Loblaws store in Canada

The introduction of the Guiding Stars nutrition guidance program in supermarkets has “translated into measurable nutritional benefits” by prompting customers to make healthier food choices, a recently published study found. Researchers also observed an increase in sales and revenue at supermarkets that offered the food-rating system.

The study, “Consumers’ Response to an On-Shelf Nutrition Labelling System in Supermarkets: Evidence to Inform Policy and Practice,” appeared in The Milbank Quarterly, a peer-reviewed journal focusing on original research, policy review and analysis. The investigation, headed by Erin Hobin of Public Health Ontario and colleagues from Duke University, the University of Toronto and the University of Waterloo, aimed to discover whether simple nutrition labels on grocery store shelves help consumers make healthier food choices. Based on data from three supermarket chains and interviews with almost 800 shoppers, the study found that Guiding Stars helped shoppers choose items with less trans fat and sugar and more fiber and omega-3 fatty acids.

The research additionally found that stores that adopted Guiding Stars saw higher sales and revenue, with increases in the number of products per transaction, price per product purchased and total revenues. This was the first study of its kind to note a positive effect on store sales and revenue from an on-shelf nutrition labeling system.

The impact of Guiding Stars varied according to food product categories, researchers found, with the greatest positive shifts seen in categories consumers consider healthier, such as fruit and vegetables, grains and cereals, dairy products, eggs, meats and fish. Additionally, exit surveys suggested that raising shopper awareness about how the system works could provide additional benefits for consumers.

“The Guiding Stars program is based on scientific consensus around the nutritional quality of foods, so it is encouraging to see a study that demonstrates its use to consumers,” said Alison M. Duncan, a professor at the Department of Human Health and Nutritional Sciences at the University of Guelph, and a Guiding Stars adviser. “The study adds to the evidence that the simple and clear Guiding Stars program can help shoppers make healthy choices when purchasing groceries. Although the shopper shifts toward purchasing foods with higher nutritional quality were small in this study, small changes in behavior over time are realistic and contribute to a healthy lifestyle.”

Introduced 2006, the Guiding Stars nutrition guidance program is based on a patented nutrition rating algorithm that provides a simple, easy-to-understand tool for making better nutrition choices. Guiding Stars is currently in more than 2,000 supermarkets in the United States and Canada, including all Hannaford and Food Lion stores; can also be found in public school, college, corporate and hospital dining facilities; and is accessible through the Shopper mobile app for iOS devices.