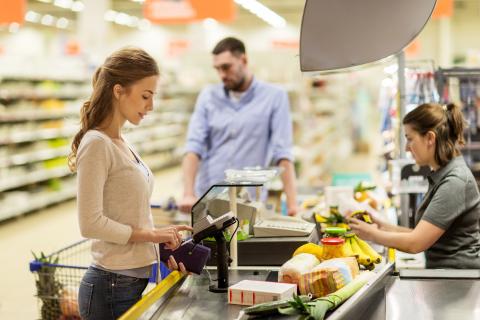 Coming off months of highs, grocery store sales edged downward slightly in April, according to the U.S. Census Bureau.

The U.S. Census Bureau is out with its report on April retail and foodservice sales, which showed some relative stability in grocery at a time of ongoing concerns about inflation, labor and product shortages.

According to the Census Bureau data, estimated monthly sales at grocery stores were $68.906 million on an adjusted basis, compared to $68.974 million in March. The numbers for this spring are higher than last year, albeit in an environment with higher prices. In April 2021, sales reached $63.756 million.

The seemingly steady – if only slightly downward – state of purchasing came during a period of high inflation, especially in the grocery sector affected by price hikes not seen in 40 years. Earlier this month, the U.S. Department of Labor reported that the food-at-home consumer price index hit 10.8% in April, compared to the 8.3% overall CPI rate.

According to retail and consumer behavior expert Chip West of marketing company Vericast, April’s retail data might portend what’s in store for the summer. “The April 2022 Census Bureau monthly retail report shows that grocery sales are flat from last month. This could be a sign that inflation may be plateauing. The grocery industry has also had to deal with continued supply shortages like baby formula,” he noted.

On a macro level, total retail sales were up 0.9% in April by the bureau’s estimates, largely driven by sales in cars and restaurant dining. Sales in foodservices and drinking places topped $83.741 million in April, higher than the $82.098 million in March and way over the $69.899 million in April 2021.

With summer approaching, West said that food retailers are taking concurrent market factors and trends into account as they make plans to fuel more sales growth. “In order for grocers to stay competitive in response to rising prices, they need to promote value and offer great deals. Consumers want immediate satisfaction and will go where the best price, value, and availability is,” he remarked.