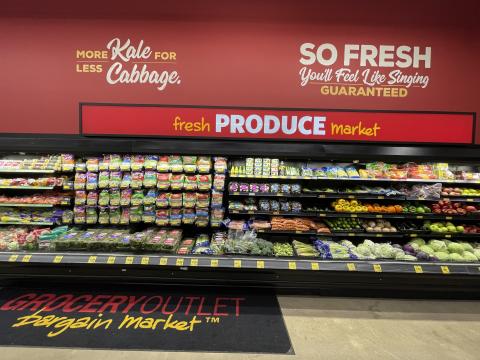 In October, the retailer launched a pilot program at 68 stores in California to test whether the treasure-hunt appeal of its physical stores translates online.

Grocery Outlet is shaking up the C-suite as it continues to scale its business for future growth.

The company announced that Pamela Burke, who has served as chief administrative officer and general counsel, will become chief stores officer effective Jan. 1. Burke will report to RJ Sheedy, president.

Also, Heather Mayo, chief sales and merchandising officer — east is leaving Grocery Outlet in early March. The company said Mayo will be transitioning her responsibilities to functional leaders at the local and corporate level. The company will continue to support regional autonomy, ownership and decision-making via localized resources across several business functions including purchasing and new store development.

"2021 marks Grocery Outlet’s 75th year in business and at the heart of our success has been the knowledge, skill and autonomy of our independent operators," said Eric Lindberg, CEO. "As we look ahead towards our next 75 years of growth, this new organizational structure allows us to more effectively support our operators in growing their businesses while facilitating local decision-making and independent operator independence. Pam has done an exceptional job leading several business functions and coordinating support to our independent operators. As such, I am confident she will make valuable contributions in her new role. I also want to thank Heather for her efforts during her tenure at Grocery Outlet and wish her the best in her future endeavors."

In November, the company reported that it continued to lap last year's pandemic sales gains in the third quarter, posting a 4.3% drop in same-store sales.

In October, the retailer launched a pilot program at 68 stores in California to test whether the treasure-hunt appeal of its physical stores translates online. The company said it is working with Instacart to launch the program for a six-month period and will offer same-day delivery.

The company opened seven new stores, ending the third quarter with 407 stores in six states. It said it expects to open eight stores during the fourth quarter of fiscal 2021 for a total of 36 new stores opened in fiscal 2021.

Based in Emeryville, Calif., Grocery Outlet has more than 400 stores in California, Washington, Oregon, Pennsylvania, Idaho and Nevada. The company is No. 69 on The PG 100, Progressive Grocer’s 2021 list of the top food and consumables retailers in North America.