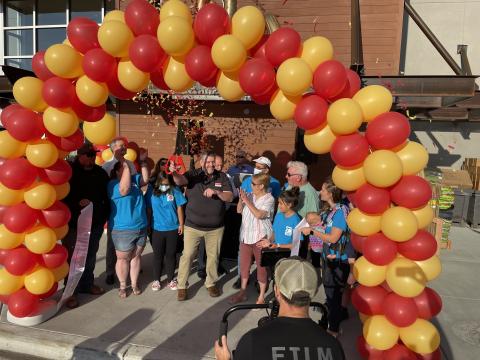 Grocery Outlet celebrates the opening of its 400th store and newest location in Hailey, Idaho.

Besides opening its 400th store, Grocery Outlet is also celebrating its 75th anniversary. For the diamond commemoration, customers in all of its stores can take advantage of “diamond deals” of up to 75% off select items, as well as throwback bargain deals and highlights of some of the company’s most unique bargain buys from throughout the years.

“We are incredibly proud to celebrate the opening of our 400th store, a momentous number 75 years in the making,” said Grocery Outlet’s CEO Eric Lindberg. “Since our founding, Grocery Outlet has built on the core value of ‘touching lives for the better,’ and today, we are proud to play a part in 400 communities across the U.S. When you shop at a Grocery Outlet store, you are shopping local and supporting entrepreneurs within your own community. I’d like to congratulate Shane Anderson, along with all of our IOs across the country, for providing a treasure-hunt shopping experience for all of our bargain-minded customers.”

The 400th store opening follows a mixed first-quarter earnings report, with profit up and comps down. Grocery Outlet said that for the first quarter ended April 3, net sales decreased by 1% to $752.5 million. Same-store sales decreased by 8.2% compared with a 17.4% increase in the same period last year. Meanwhile, net income increased 49.4% to $18.9 million, or 19 cents per diluted share.

Based in Emeryville, Calif., Grocery Outlet has 400 stores in California, Washington, Oregon, Pennsylvania, Idaho and Nevada. The company is No. 69 on The PG 100, Progressive Grocer’s 2021 list of the top food and consumables retailers in North America.