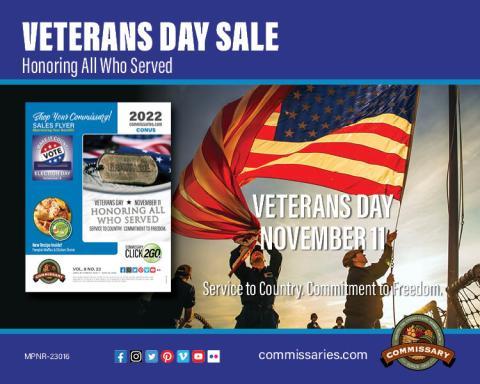 DeCA has revamped its discount program to help service members and their families contend with recent high inflation.

The Defense Commissary Agency (DeCA) is both honoring its service members and providing them and their families with relief at a time of high prices. Customers can take advantage of savings on everyday items as well as supplies for their Thanksgiving meals. Earlier this year, DeCA launched a new and improved promotion, Your Everyday Savings (YES!) program, which provides deals on products that people buy the most.

Michigan-based food solutions company SpartanNash, which operates a robust military distribution business in Norfolk, Va., is offering an 11% in-store discount at its corporate-owned retail stores on Veterans Day. The savings are available to veterans and active duty military members from Nov. 11 to Nov. 13. In addition, SpartanNash is donating $15,000 to Operation Homefront to help feed military families during the holiday season.

Similarly, Tops Friendly Markets in New York will honor an 11% discount to all veterans and immediate family members in the same household on Veterans Day. “The respect and gratitude we have for the people who serve and have served in the military is immeasurable, and for that we are forever grateful,” remarked John Persons, Tops’ president. “We wanted to support local military personnel by giving back to our associates and customers who have courageously defended our country and made many sacrifices through their military service.”

In addition to the many grocers that are offering discounts, food retailers are offering their gratitude in other ways. Chicago-based Dom’s Kitchen & Market, for example, is offering a complimentary meal from its kitchen to all veterans and active military members on Veterans Day between 11 a.m. and 9:30 p.m.

Iowa-based Hy-Vee, Inc. launched its monthly Hy-Vee Homefront initiative earlier this month and, as part of that, will be offering a free dine-in breakfast to veterans on Nov. 11. The program also includes a register campaign benefiting the nations’ veterans and active-duty military members and raising awareness of support for organizations that provide assistance. Hy-Vee is matching customer donations up to $100,000 and CPG partner Coca-Cola is additionally matching up to $50,000 with all proceeds going to Hope for the Warriors, Operation First Response, American Red Cross and the Puppy Jake Foundation.

H-E-B is another retailer that makes an extra effort to recognize veterans. The Texas grocer reported that it planned more than 250 appreciation events across the state on Veterans Day. Through its Homes Built for Heroes program, H-E-B has helped provide nearly 40 mortgage-free houses to severely wounded military veterans and their families. The retailer is also extending its Operation Appreciation donation campaign through Dec. 6.

Food retailers are also marking the occasion to recognize their own team members who have served in the U.S. armed forces. New York-based Wegmans Food Markets, for example, spotlighted several veteran associates on its website, and noted that it is proud to employ hundreds of current and former service members.