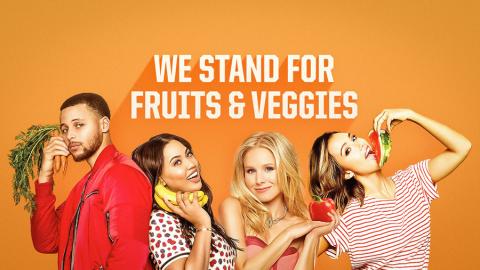 More than 164 Giant Food stores in Maryland; Washington, D.C.; and Virginia are the venue for a national campaign promoting fruits and vegetables by enlisting such local sports heroes as the Washington Wizards’ Bradley Beal, the Washington Mystics’ Elena Delle Donne and the Washington Capitols’ T.J. Oshie.

The FNV (fruits and veggies) campaign was created by the Washington-based Partnership for a Healthier America (PHA) to leverage the power of marketing and celebrity endorsements to change the way that kids and young adults view produce to inspire healthier eating as part of a wider effort to lower obesity and the chronic conditions linked to it, including diabetes and heart disease.

“Giant is proud to launch FNV through our partnerships with PHA and MSE to help encourage children to lead healthy lifestyles built on balanced eating,” said Giant Food President Gordon Reid. “We have a longstanding history of leading and supporting programs and initiatives that promote healthy choices, including [nutrition guidance system] Guiding Stars, so the FNV campaign is a natural continuation.”

“I have a feeling that Bradley Beal has more influence than I do on even my son when it comes to eating broccoli,” quipped PHA President and CEO Nancy E. Roman. “The power of sports and celebrity will outrank even grandma when it comes to shaping the food culture we need to ensure the next generation of children and young adults live healthier lives.”

Since it rolled out nationally in 2015, FNV has recruited more than 85 celebrities and athletes, among them actors Kristen Bell, Jessica Alba and D.C.-born Regina Hall, in addition to Golden State Warriors Point Guard Stephen Curry.

According to PHA, so far FNV has garnered millions of media impressions and seven out of 10 people reported eating more fruits and vegetables after seeing the campaign.

Landover, Md.-based Giant Food operates 164 supermarkets in Virginia, Maryland, Delaware, and the District of Columbia, employing about 20,000 associates. The banner’s parent company, Ahold Delhaize USA, is No. 4 on Progressive Grocer’s 2018 Super 50 list of the top grocers in the United States.