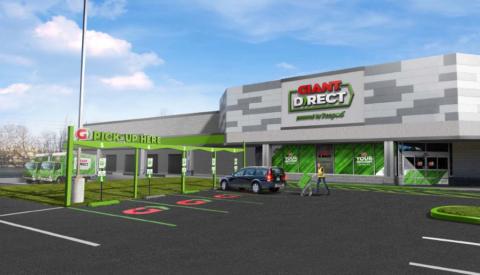 “Today’s grand opening is a pivotal moment that reflects a renewed commitment to Lancaster and an investment in a special neighborhood,” noted Bertram. “We are grateful to Mayor Sorace for her guidance and support, and we thank all of our Reservoir Street neighbors for their patience as we brought this one-of-a-kind ecommerce hub to life.”

As well as expanding the reach of Giant’s next-day delivery service to 40 percent more residents in the greater Lancaster area, the new facility – in partnership with Peapod Digital Labs – will be the first of the banner’s ecommerce centers to offer on-site pickup service, with online orders brought directly to customer vehicles waiting outside. The hub also features a walk-up vestibule with easy-order tablets.

“The city of Lancaster was happy to work with Giant to bring the new ecommerce hub to North Reservoir Street,” said Sorace. “In addition to giving neighborhood residents a source of fresh food within walking distance, the new hub is adding 150 quality jobs to the local economy, many of which have been filled with residents of the city of Lancaster.”

Also part of the grand-opening festivities, Giant revealed a three-year, $150,000 donation to the Power Packs Project, which aims to improve the mental and physical health of local kids by helping their parents provide nutritious meals over the weekend when the school breakfast and lunch programs aren’t available.

Further, on Saturday, Feb. 16 from 9 a.m. to noon, the hub will host a Community Day Celebration. This free event is open to the public and will include online ordering demonstrations; promotional giveaways and prizes; free hot chocolate, soft pretzels and popcorn; and face painting and balloon artists. The first 200 attendees will receive a free bag of groceries, and radio stations Rumba 100.5 FM and FM97 will be on site providing live music.

The grocer said last June that it would invest $22 million in the region, and revealed the grand-opening date of the ecommerce facility late last month.