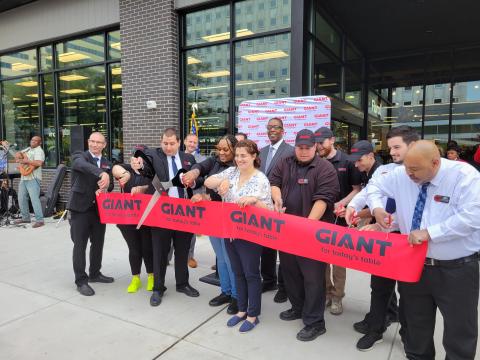 The Giant Co.'s new store, located at 510 North Broad Street in Philadelphia, is one of two new stores that are scheduled to open in the Philadelphia area a week apart from each other.

The Giant Co., a banner of Ahold Delhaize USA, has opened a brand-new store that joins the four locations the grocer has already opened in the Philadelphia area over the past year under the Giant banner.

The more than 50,000-square-foot store, which is located at 510 North Broad Street, is one of two new stores that are scheduled to open in the Philadelphia area a week apart from each other. The North Broad store will operate from 6 a.m. to 10 p.m., seven days a week, and will employ approximately 150 full- and part-time associates. On July 1, The Giant Co. is set to open another store in Richboro, Pa. The 49,800-square-foot location will be open seven days a week and employ 170 full- and part-time employees.

Customers will also be able to experience the company’s signature fresh departments such as farm-fresh garden produce, fresh meat and seafood, and a bakery. In addition to these signature departments, customers will also receive special options like sushi made in-store, a hot food section with smoked meats, and a Beer & Wine Eatery with slushie options.

As part of The Giant Co.’s commitment to making a difference in the local communities that it serves, the North Broad store celebrated its opening by making donations to Engine 13, Independence Library, Library of Accessible Media for Pennsylvanians, Parkway Central Library, Sunday Breakfast Rescue Mission and Philadelphia Police 9th District.