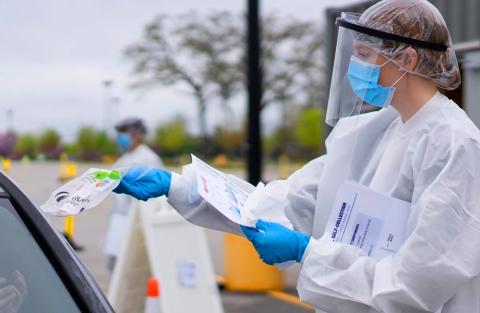 The Kroger Co., one of the country's first retailers to launch testing for the virus in March, said Tuesday it is expanding its testing services to more than 12 states. This expansion will allow Kroger Health to conduct as many as 100,000 tests by the end of next month, the company said. So far, Kroger says, the unit has conducted almost 8,000 tests at 30 locations in six states — Colorado, Kentucky, Indiana, Michigan, Tennessee and Ohio. The company did not specify which new states would be included in the expansion.

Testing is a key part of the strategy to reopen the country and loosen social distancing rules. Widespread testing would allow states to conduct programs to better track infections and isolate sick people.

On Tuesday Walmart said it is now supporting 20 testing sites in 12 states — opening more every day. By the end of May, the retailer anticipates operating more than 100 sites, assuming there is adequate lab capacity.

"With 100 sites we can bring 20,000 tests a week to people who need them, especially in hot spots and underserved areas," said Dan Bartlett, EVP/corporate affairs, Walmart. "Unfortunately, COVID-19 will continue to challenge us over the coming months. We continue to monitor developments in technology, including new tests, to determine how they may play a role in our efforts, as we work to support our associates and our communities. I am inspired by the spirit and drive of my colleagues who are working hard to help meet the needs of the communities we serve. We will continue to find ways to help, just as we always do."

CVS Health announced Monday that starting in May, it "will offer self-swab tests to individuals meeting Centers for Disease Control and Prevention criteria." The move comes in addition to large-scale testing the company has been offering at some locations in five states since March. The new free self-swab testing will take place at up to 1,000 CVS locations by the end of May, which equals more than 1 in 10 of the company's stores. Patients will schedule tests online and will get tested in CVS parking lots or drive-thru windows. The company won't conduct testing inside its stores. The company said its goal is to process up to 1.5 million tests monthly.

“We all share the same goal, and that’s dramatically increasing the frequency and efficiency of testing so we can slow the spread of the virus and start to responsibly reopen the economy when experts tell us it’s safe,” CVS CEO Larry Merlo said in a statement.

Walgreens announced Monday it's opening free drive-thru nasal-swab testing sites in 49 states and Puerto Rico. It was not immediately clear how many stores would offer tests, but the company said it expects to test more than 50,000 people weekly once it's fully operational. Walgreens already has 18 drive-thru testing sites open in 11 states. Patients must make an appointment online and meet CDC criteria.

The announcement of retailers' expanded testing efforts coincides with a meeting between President Trump and some of the nation’s largest retailers and lab testing companies on Monday. At the White House meeting, executives from CVS, Walmart, Walgreens and Rite Aid announced a goal of opening more than 1,000 testing locations by the end of May, capable of processing more than 1.5 million tests per month.

The new coronavirus has sickened more than 1 million Americans and killed more than 57,000 as of Tuesday, according to data compiled by Johns Hopkins University.