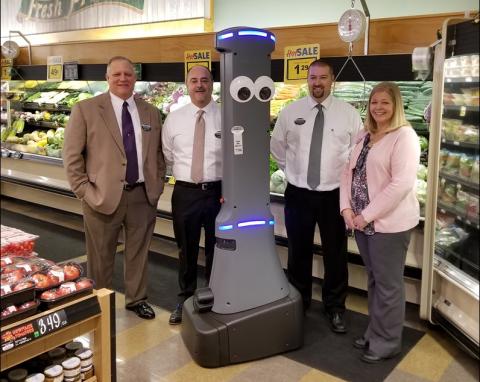 In the future, developers hope to improve the technology to also check and report temperatures

Marty the Robot, which has debuted in a La Follette, Tenn., Food Lion store, clean-sweeps the store a dozen times daily to identify slip-and-fall hazards on the floor, to which he alerts associates, and he also warns nearby shoppers to avoid the mess. The slender gray robot – developed by Lexington, Ky.-based Badger Technologies – additionally scans shelves for out-of-stocks and ensures that shelf pricing is aligned with the front-end registers.

Sporting big googly eyes, a name tag, and a Shop & Earn ribbon, the robot has become popular with customers, some of whom come by the store with friends and family just to meet it. Numerous postings and selfie photographs with Marty have also appeared on social media.