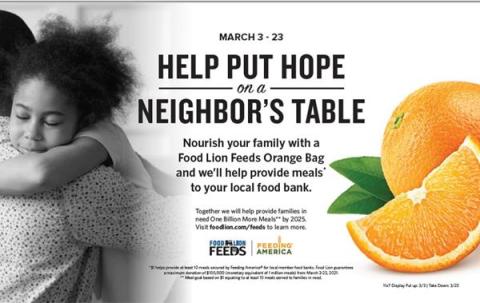 Food Lion is making it easy for shoppers to help fight hunger in their communities by simply purchasing specially marked Food Lion oranges in-store or online through Food Lion To Go.

“Food Lion Feeds is about working together with our neighbors to support our neighbors in need, and the Food Lion Feeds orange bag campaign is a simple way to do that,” said Jennifer Blanchard, director of community relations at Food Lion. “Every donation makes a difference. Together we can help provide more than meals to people in our community; we can provide hope, and we look forward to partnering with our customers again this March to make a big impact in the lives of our food-insecure neighbors who are counting on us more than ever.”

Additionally, Food Lion Feeds has helped make sure that more than 750 million meals were given to neighbors in need since 2014. After providing its 500 millionth meal in 2019, the retailer committed to provide 1 billion more meals to needy individuals and families by the end of 2025. Part of this commitment includes hosting retail campaigns like the Orange Bag, as well as providing meals through the 20-year-old Food Lion Food Rescue program, in which near-date fresh produce and pantry staples are donated to a network of local feeding agencies.

Food Lion said in January that its Faces of Hope campaign donated the equivalent of 1.6 million meals to assist families and individuals still affected by the COVID-19 pandemic. The initiative is intended to help local food bank partners keep up with unprecedented demand after the holiday giving time period has passed.

Last month, Food Lion revealed that it donated more than $106,000 in child feeding grants to No Kid Hungry to support the campaign’s mission to end child hunger. The grants were distributed to five school districts across South Carolina and Virginia, and will support feeding programs at nearly 200 schools across those districts in the towns and cities that Food Lion serves.

“Feeding America is grateful to Food Lion and its customers for their ongoing commitment to fighting hunger in their communities,” said Lauren Biedron, VP of corporate partnerships at Feeding America. “Their generous donations will help food banks provide food to neighbors who worry about where they will find their next meal.”

Chicago-based Feeding America is the largest hunger-relief organization in the United States. Through a network of 200 food banks and 60,000 food pantries and meal programs, it provides meals to more than 40 million people each year.

Salisbury, North Carolina-based Food Lion has more than 1,000 stores in 10 Southeastern and Mid-Atlantic states and employs more than 68,000 associates. Its parent company, Ahold Delhaize USA, a division of Zaandam, Netherlands-based Ahold Delhaize operating more than 2,000 stores across 23 states, is No. 11 on The PG 100, Progressive Grocer’s 2020 list of the top food and consumables retailers in North America.